How It Works: A System That Reverses Paralysis 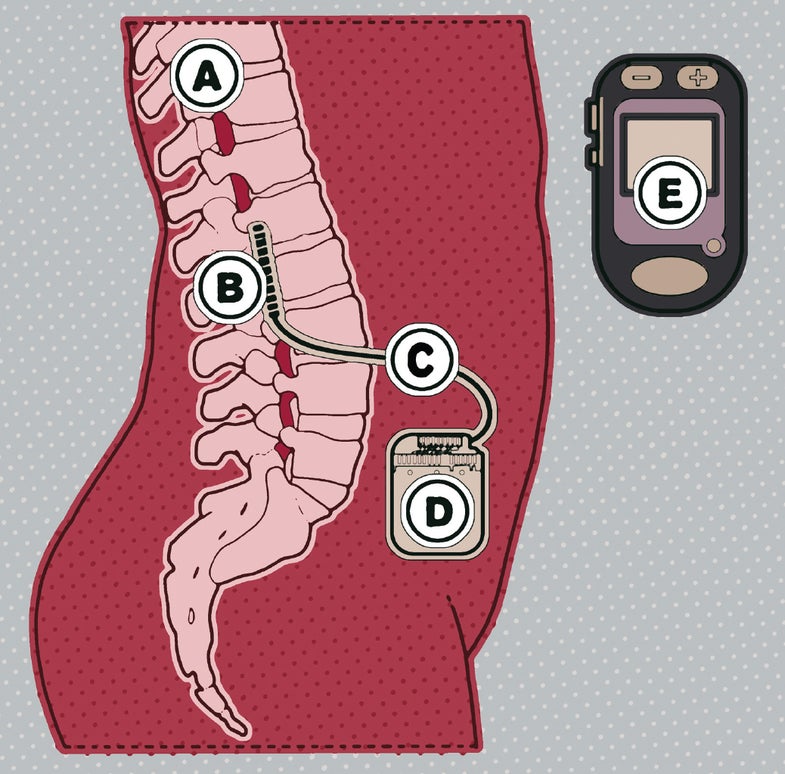 On December 5, 2011, Andrew Meas wiggled his toes for the first time since a motorcycle accident four years earlier paralyzed him from the chest down. Within a week, he was beginning to stand. Meas’s remarkable (albeit partial) recovery comes courtesy of a groundbreaking use of an electrode array implanted over his spinal cord.

For decades, researchers have been seeking ways to help the millions of people with spinal cord injuries regain control of their limbs, with frustratingly little success. The new device provides a rare glimmer of hope. Scientists at the University of Louisville’s Kentucky Spinal Cord Injury Research Center, where Meas and three other patients received their im­plants, speculate that the stimu­lation may be reawakening connections between the brain and the body. “There’s residual circuitry that we can recover that no one realized was possible to do,” says Reggie Edgerton, director of the Neuromuscular Research Laboratory at the University of California, Los Angeles. “We were shocked.”

Some of the benefits, such as better bowel and bladder control and improved blood pressure, remain even when the device is switched off. Electrical stimulation isn’t a cure, of course. The patients still can’t walk. And the stimulation must be customized for each individual, a time-consuming process. But it’s an enormous advance nonetheless. Says Edgerton, “It opens up a whole new mechanism of recovery.”

A) When a person with a spinal cord injury thinks about wiggling his toes, the message travels from the brain down the spinal cord, but fails to reach its destination.

B) An array of 16 electrodes implanted over the lower spinal cord stimulates circuitry that controls the lower body, awakening dormant neurons that carry the message.

C) A wire connects the electrode array to the stimulator, a rechargeable device about the size of a pager, implanted in the abdomen just below the skin.

E) A handheld remote allows the user to select which circuits he wants to stimulate—for example, left toes or right leg.