How It Works: The Inner Earth 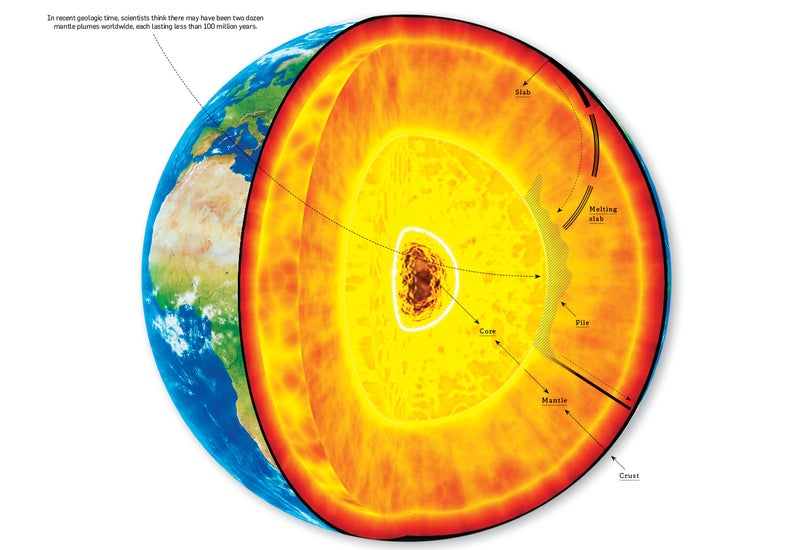 Plate tectonics—the theory that explains the sinking, spreading, and slip-sliding of big chunks of Earth’s surface—is a bedrock of geology. But it can’t explain what happens to plates once they sink, or account for the forces that drive many of the planet’s volcanic hotspots. Today, advances in seis­mology, geochemical analysis, and computer modeling have enabled researchers to collect a wealth of new geological data about our planet and form a complementary theory of what’s going on beneath its surface.

When one tectonic plate is forced beneath another, forming a subduction zone—the cause of many earthquakes—its leading edge sinks deeper into the mantle. The slab descends slowly, mixing molten rock as it goes, and as it nears the core, it partially melts.

Most volcanoes begin in the relatively cool upper mantle and shoot up along the rims of tectonic plates. But geologists now think many of Earth’s hotspots (in Iceland, for example) are powered by mantle plumes. These plumes rise in columns from the very bottom of the mantle, some 1,800 miles down, and carry heat from near the core to the crust.

Plumes originate along the edges of two vast areas—commonly known as piles—that lie opposite one another on the equator, one under Africa and the other under the South Pacific. Both piles contain material that seems to have remained in the deep mantle for about four billion years (perhaps because of its high iron content).

Temperature: Ranges from surface temperature near the top to 1,600˚F at the bottom

Composition: Silicates that take the form of granite and basalt rocks

Two thirds of the planet’s mass, the mantle is the source of molten rock that rises to the surface during volcanic eruptions and when plates spread apart.

Composition: Largely silicate rocks containing more iron than those in the crust

The ultrahot, metallic core sits at the planet’s center.

Composition: Predominantly iron, with some nickel and other elements; the outer core is molten, and the inner core is solid.