It literally broke the scale. 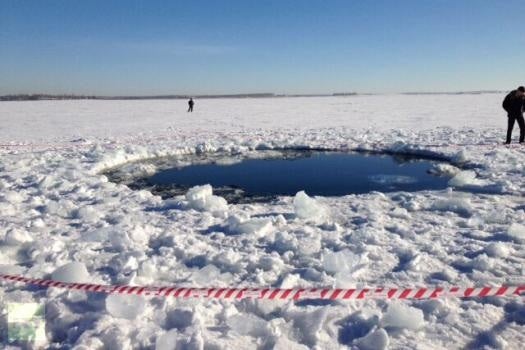 Divers have hauled a 570-kilogram-plus (1,257 pounds) hunk of meteorite from Lake Chebarkul in the Urals region of Russia. The rock seems to be a piece of the meteorite that landed in the country this February. The fragment was so large it: 1) broke into three pieces during removal and 2) broke the scale scientists used to weigh it, once the scale reached the 570-kilogram mark.

This is the largest-yet bit of the meteorite divers have been able to recover from Lake Chebarkul, RT reports. Experts the BBC and RT talked with confirmed the rock was extraterrestrial in origin. Scientists will now analyze its mineral content. It’s been packed off to a local natural history museum, so perhaps it’ll go on display soon.

The dive seems to be part of an ongoing effort to pull meteorite pieces out of the lake for study. Divers previously recovered 12 rocks from the lake, but scientists confirmed only five of those were actually meteorite fragments, RT reports.

The meteor that exploded over Russia’s Chelyabinsk region in February weighed 11,000 tons in total, injured 1,600 people and caused $31 million in damages, RT reports. When it finally plunged into Lake Chebarkul, it left a large hole in the lake’s ice cover.