Google's worldwide science fair has just declared its winners. These are the geniuses of tomorrow, the kids who will grow up to invent amazing things and cure diseases. 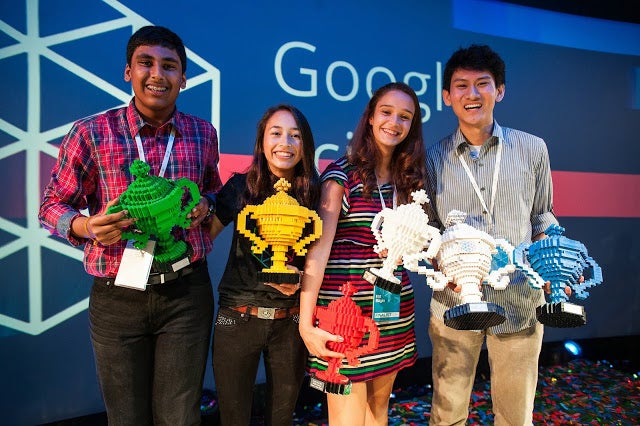 Every year, Google holds one of the most impressive science fairs in the world (along with Intel’s). This year, teenagers from 120 countries submitted amazing projects–projects to diagnose diseases, to make smartphones do amazing new things, to create exoskeletons, and many more. Three winners, one from each of three age groups, were selected at Google headquarters in California.

The youngest category, a fight among 13- and 14-year-olds, was won by Viney Kumar of Sydney, Australia, with a project called the PART Program. PART stands for Police and Ambulances Regulating Traffic, and it’s designed to give alerts to drivers when an ambulance or police vehicle is approaching, beyond the regular sirens and flashing lights. The project is targeted at the high-end present and very near future, when we’re all syncing our smartphones with our cars–mid-range and expensive cars have this ability now, and soon that’ll trickle down even further. It uses GPS from emergency vehicles to beam precise locations to your phone, which then gives you an alert (both graphical and audio) as you drive. Pretty impressive for a kid in ninth grade.

Ann Makosinski of Victoria, BC, Canada won the 15- to 16-year-old category with her hollow, battery-less flashlight. It uses Peltier tiles, which produce electricity when one side of the tile is hot while the other is cold. The source of the heat on the hot side of the tile is simply the heat from the user’s hand.

And finally the big boy, relatively: the 17- to 18-year-old category was won by Eric Chen of the U.S., with a startlingly mature project that’s attempting to create a medicine effective against every kind of flu. From Google: “Combining computer modeling and biological studies, Eric’s project looks at influenza endonuclease inhibitors as leads for a new type of anti-flu medicine.”

You can read more about the Google Science Fair winners here.