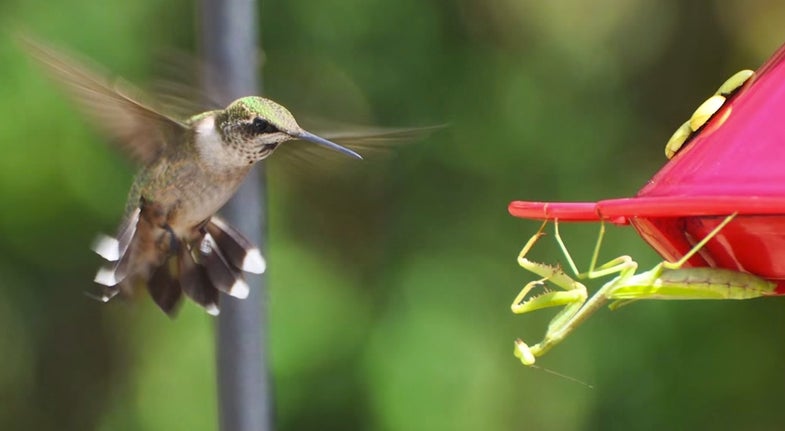 I was recently alerted to a video showing a praying mantis attacking a hummingbird. “Wait,” I thought, “mantises can catch hummingbirds?” This seemed unlikely to me, due to the size difference. I searched and found several videos purporting to show a hummingbird “murdered” by a mantis, or something similar. Almost all of these videos presented a mantis holding onto a hummingbird and appearing to eat it — but none of them showed the moment of attack itself.

I kept looking and finally found this video which does show a mantis successfully catching a hummingbird and beginning to gnaw on it. Unfortunately, it’s impossible to say with 100 percent certainty that the mantis would have won the match, because the maker of the video decided to flick the mantis, sending the insect and its avian prey tumbling. (Go ahead and skip to 0:36 to see the mantis strike.)

But, after a bit of research, it seems pretty clear that mantises are capable of catching hummingbirds. In this 1982 study in Biological Reviews, the authors report that praying mantises can indeed catch small hummingbirds. “Praying mantises reach a length of 98 mm [3.9 inches] and may feed on small birds,” the authors write. However, “the actual observations in the literature are inconclusive as the captured birds were ultimately released by concerned ornithologists,” they continued, somewhat perplexingly, since it is generally frowned upon for scientists to intervene in the lives of the animals they study.

It makes more sense if you consider that these ornithologists — all bird lovers, no doubt — likely observed these things in passing and weren’t specifically studying avian-insect interactions. I wonder if a mantis specialist had witnessed this: What might he or she do?

Here’s a video of a mantis catching a hummingbird, and promptly falling off the bird feeder, perhaps to savor its bird-treat on the ground… or maybe not. (Jump to 0:46).

There’s another account (albeit second-hand) in The Wilson Journal of Ornithology of a ruby-throated humming bird being caught by a praying mantis. But this man also helped the hummingbird escape. Another 1949 anecdote from _The Auk _records a praying mantis catching a hummingbird, and a more modern piece from Birdwatcher’s Digest recounts one bird lover’s tail of the same thing, with photos. This may be the only account I’ve seen where the author/witness didn’t try to free the bird.

It all goes to show that praying mantises are not to be toyed with, at least by creatures that are approximately mantis-sized or smaller. These insects have also been known to attack and eat small mice.

In celebration of the mantis, here is “True Facts About The Mantis,” which is at least mostly factual.

Animals
Ask Us Anything