Onboard the Minotaur 1 rocket, there's a gaggle of CubeSats. 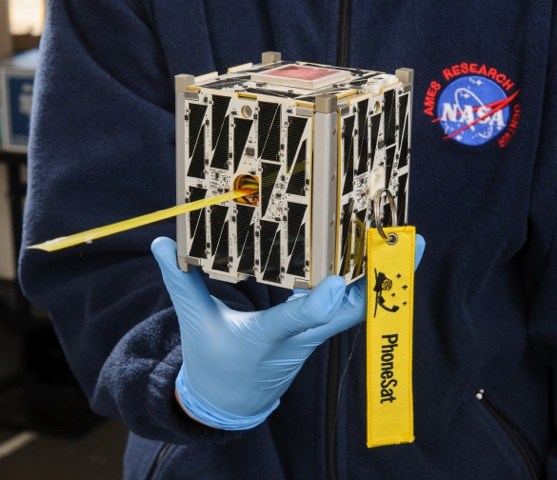 Orbital Sciences’ Minotaur 1 rocket is carrying some historic cargo to space today. Alongside NASA’s latest smartphone-enabled PhoneSat 2.4 is another tiny satellite, called TJ3Sat, built by students at Thomas Jefferson High School for Science and Technology. This CubeSat is the first satellite built by high school students and is set to launch from the Wallops Flight Facility in Virginia at 7:30 p.m. EST.

This will be the Minotaur 1’s 25th mission, and the rocket will be carrying a record of 28 CubeSats—4-inch-cube satellites based around smartphone technology. An out-of-the-box smartphone is housed within the CubeSat structure, making for a relatively inexpensive spacecraft. Three of NASA’s PhoneSats have successfully spent about a week in orbit. PhoneSat 2.4 will go into a higher orbit than any other PhoneSat has before.

As a part of NASA’s Educational Launch of NanoSatellites (ELaNa) program, the Thomas Jefferson High School students’ 2-pound satellite is the culmination of seven years of work by more than 50 students. ELaNa aims to attract students to study STEM disciplines, which matches up well with TJ3Sat’s mission. Once in orbit, the CubeSat will send and receive data from students and other amateur radio users on Earth. Submissions can be made via their website, and approved strings of text will be sent to the satellite in space. In return, Earthling users will receive a voice interpretation of the text via radio frequency.

“It used to be that kids growing up wanted to be an astronaut. I think we might be seeing kids saying, what they want to do is build a spacecraft. The idea here is that they really can do that,” Andrew Petro, program executive for small spacecraft technology at NASA, said in a statement. “They can get together with a few other people to build and fly a spacecraft. Some students coming out of college as new hires have already built and flown a satellite . . . that’s a whole new notion, one that was not possible even 10 years ago.”