The First “Potentially Habitable” Exoplanet Was Probably Just a Sunspot 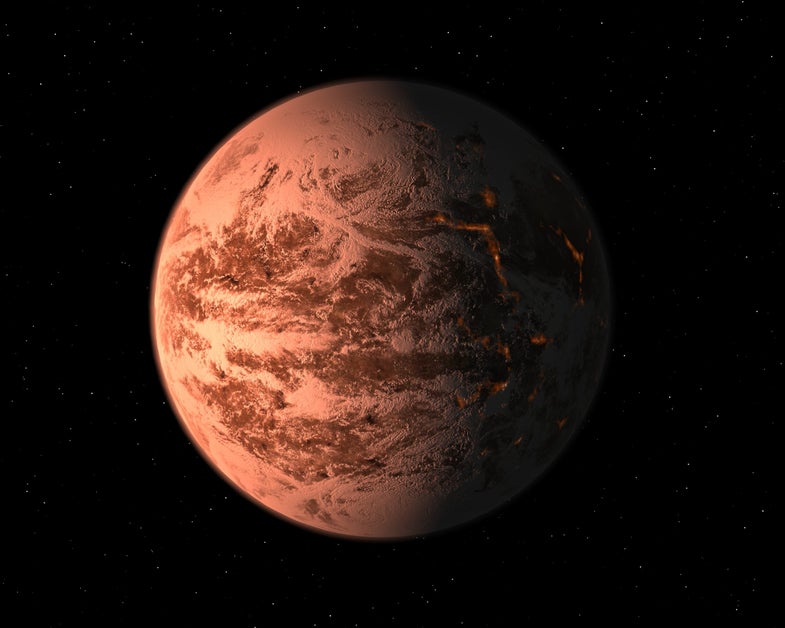 Way back in 2010, Gliese 581g made waves as “the Goldilocks planet“. It was the first planet scientists found within the habitable zone—the region around a star where it’s not too hot and not too cold for liquid water to endure on a planet’s surface. But after the initial excitement about finding a planet that could potentially support life, some scientists started to seriously doubt whether Gliese 581g was really there, because the signal was weak. Despite all the debate, lots of astronomers listed Gliese 581g as the top spot to look for alien life.

Astronomers can’t actually see the planets in the Gliese 581 star system. Instead, they detected the planetary candidates by monitoring the star’s light. As a planet orbits, its gravity tugs on the star and distorts the light coming off it, changing the wavelengths and thus the color of light that reaches telescopes here on Earth. (Here’s a longer explanation of the radial velocity technique, if you’re interested.) The problem is that the star also moves, and as it rotates its sunspots and other solar activity also distort the light coming off of it.

Until now, scientists didn’t know how fast the Gliese 581 star spins around. Now they know it makes a complete rotation approximately every 130 days. With that new information, they were able to go back into the data and take out the signals coming from the star’s movements. And when they did that, the signals for Gliese 581g disappeared. Same goes for Gliese 581d, which had also been an exciting and potentially habitable planet. But the technique did confirm that three other planets within the Gliese 581 star system are indeed really there.

Luckily, the 977 exoplanets discovered by the Kepler Space Telescope are probably not in jeopardy. Rather than measuring light wavelengths, Kepler finds exoplanets by looking for the shadows create as they pass in front of stars, so it’s not as susceptible to stellar rotation noise.

The other good news is that the new technique is handy for confirming exoplanets’ existence (not just ruling them out), and will hopefully make it easier to spot more Earth-sized planets. “For very low-mass planets like Earth, their Doppler signals will be smaller than those created by stellar activity for nearly all stars,” says astronomer Paul Robertson from Penn State University, the lead author on the new study. “It is necessary to remove the stellar activity signals in order to find these very exciting planets.”