One group of scientists is arguing that certain organisms, about a millimeter in size or slightly smaller, don't form species at all. 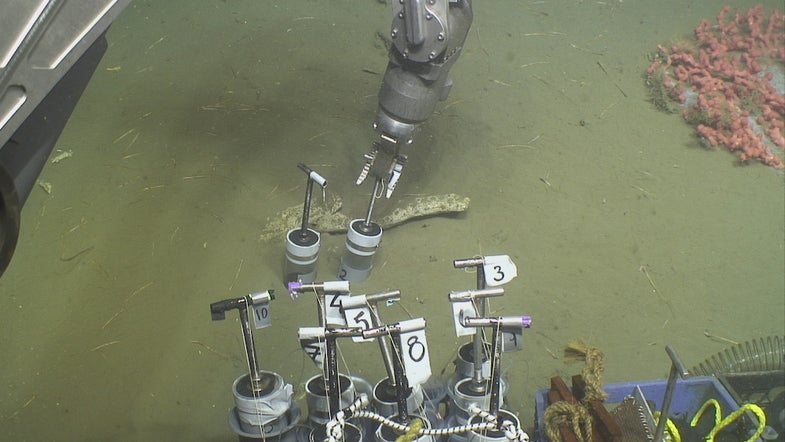 A remotely operated underwater vehicle collects samples of sand for scientists who study meiofauna and larger creatures, which are called macrofauna. Image courtesy of Deepwater Canyons 2013 - Pathways to the Abyss, NOAA-OER/BOEM/USGS
SHARE

Meiofauna are pretty weird. That’s the term for all organisms that are an in-between size, about one-half to one millimeter, so they’re much bigger than bacteria, but much smaller than ants. They live in the unlikely environment of spaces in between grains of sand at the bottom of oceans and lakes. And they include things like water bears.

Now, a team of scientists is proposing something even weirder. Meiofauna might not even form different species, as they’re commonly defined, the scientists wrote in an essay in the biologists’ magazine The Scientist. 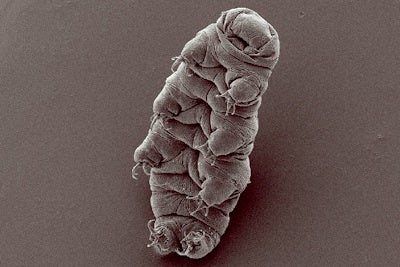 There’s always been some debate about what exactly constitutes a species. Charles Darwin talked about how hard it was to come up with a definition that worked in all cases. Modern biologists use several different definitions, including ones having to do with organisms’ genetics, their roles in their ecosystems, and with whom they can mate.

These definitions don’t work for meiofauna, the team—including a biologist, a mathematician and a physicist from different U.K. institutions—argues. For example, other studies have tried to distinguish meiofauna species by taking a whole bunch of them, sieving them for size, and then sequencing a part of their genes. Scientists then map out which individuals are more related to each other, based on their genes. Individuals of all the same species should kind of clump together on a map. Meiofauna gene-relatedness maps, however, have individuals scattered all over them, with no clear species clumps.

How could this happen? The U.K. team argues it has to do with meiofauna’s enormous populations. They are little guys, but there are very many of them. The scientists created a mathematical model to show that evolution acting on meiofauna populations shouldn’t create genetically clumped species. The scientists don’t explain in their essay whether they think their model also applies to bacteria and other super-small organisms that have even larger populations than meiofauna. Scientists certainly describe bacteria in species, although they, too, defy certain species definitions, because of the weird ways they’re able to share genes with one another.

How is it possible for evolution not to form species sometimes? The U.K. researchers have an interesting explanation. Evolution doesn’t have any reason to create species at all, they say. Instead, evolution acts on individuals, culling some, while leaving others to multiply. And at some scales of life, it seems, that process doesn’t necessary lead to well-separated species.