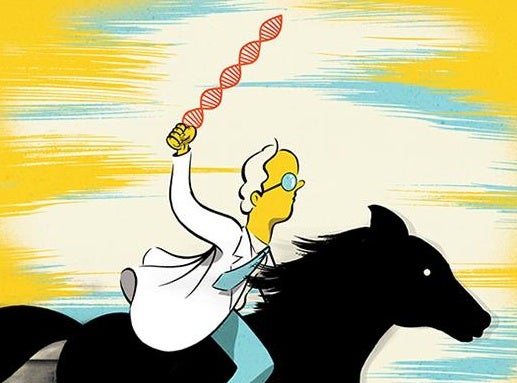 Jonathan Wyatt is less of a nuisance these days, his wife Diana told the BBC. Wyatt was the first volunteer to receive an experimental new gene therapy for a condition he has, choroideremia, that has slowly robbed him of his vision since he was 19. Two years after he received his treatment, he’s able to read three more lines on the optometrist’s chart. Diana Wyatt, of course, has other ways of measuring his improvement: “He is more independent, he can find things he couldn’t before, he can go to the shops on his own and he’s less of a nuisance!” she said.

Since 2011, other things have gone well for this trial, too. Five other patients joined it. The team of European and U.S. researchers working on the trial report today that six months after their initial treatment, two of the six volunteers—those with the most advanced choroideremia—could read two to four more lines on eye charts. The others could see better in low light, The Wall Street Journal reports.

To learn more about this advance, I recommend the BBC article for fun quotes from the two most improved patients, and The Wall Street journal article for a deeper discussion of the history of experimental gene therapies and the potential drawbacks. The two together also provide a good explanation of how the choroideremia gene therapy works.

Feel like you’ve read something like these stories before? Perhaps you have. In recent years, another team of researchers has reported similar, early-stage success in reversing some blindness caused by another genetic disease, Leber’s congenital amaurosis. These reports are all good signs that in the future, gene therapy may also work for other genetically-caused blindness, such as age-related macular degeneration.