Evidence Found Of A Particle That Is Its Own Antiparticle

In the future, the exotic particle could go into quantum computers. 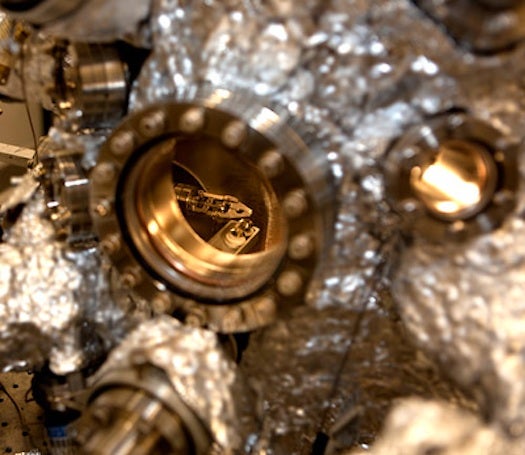 There’s a particle that physicists theorize exists that acts simultaneously as both matter and antimatter. Whoa! The particle is called the Majorana fermion, and a team of physicists is announcing today that it’s seen some evidence of its existence.

In addition to being cool, and confirming some physics hypotheses, the discovery of Majorana fermions may one day help with the creation of quantum computers. University of California-Santa Barbara physicist Alexei Kitaev has predicted that Majorana fermions may be used as a qubits, or the quantum equivalent of bits in a conventional computer, because they are stable.

Majorana fermions are predicted to appear in materials called topological superconductors. In this recent work, a team of physicists from Princeton University and the University of Texas at Austin created a topological superconductor by creating single-atom-wide chains of iron atoms on a piece of pure lead. Team members used a two-story-tall scanning tunneling microscope housed at Princeton to map their chains. At the ends of the chains, the team detected zero-energy states—a sign of Majorana fermions.

They published their work today in the journal Science.