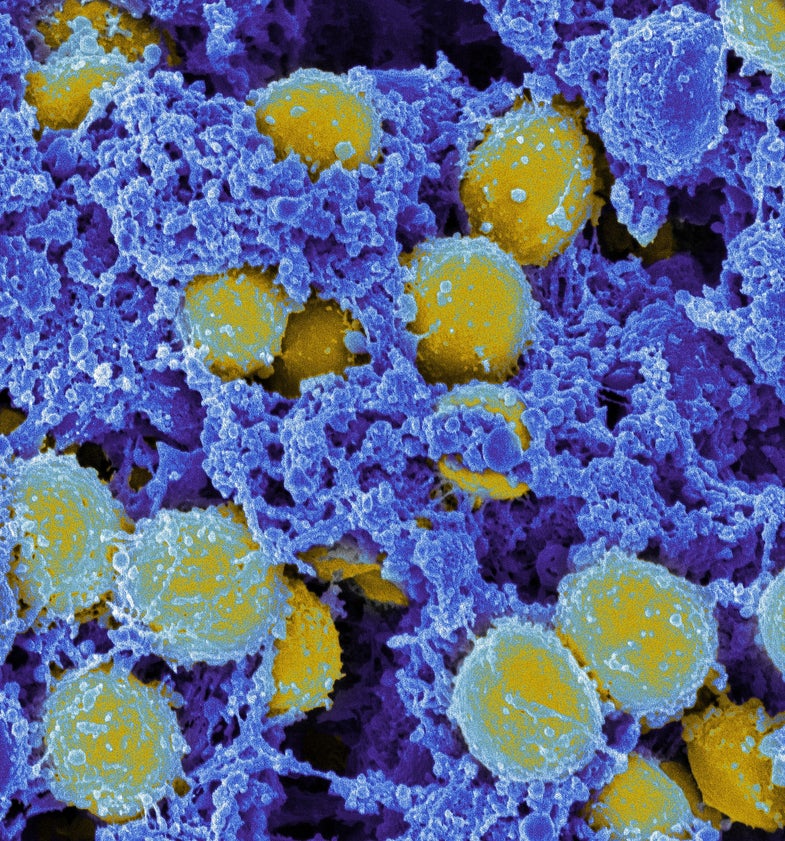 Ever since the first antibiotic, penicillin, was used as a wonder drug in the 1940s, researchers have worried about antibiotic resistance. And with good reason. The CDC estimates that 23,000 people die each year as a direct result of infection by antibiotic-resistant strains of bacteria. The World Health Organization views antimicrobial resistance as a global treat, saying on their website: “Without urgent, coordinated action, the world is heading towards a post-antibiotic era, in which common infections and minor injuries, which have been treatable for decades, can once again kill.”

A post-antibiotic era would be terrifying. Luckily, researchers are working on ways to avoid such a dire fate, looking into treatment options that go beyond antibiotics. One of these new research pathways was described this week in a paper published in the journal Nature Biotechnology. The research involves introducing liposomes, small structures that are designed to mimic a cell membrane, into the body. These particular liposomes are designed to act as decoys, drawing bacterial defenses (usually toxins secreted by bacteria) to themselves instead of letting them attack cells within the body. Once the toxins reach the liposomes, they are trapped and can’t damage the cells of the infected organism.

“We have made an irresistible bait for bacterial toxins. The toxins are fatally attracted to the liposomes, and once they are attached, they can be eliminated easily without danger for the host cells”, Eduard Babiychuk, who directed the study, said in a press release.

The hope is that these liposome reinforcements will be able to deflect damage from the body, bolstering the immune system’s ability to respond to a bacterial infection. But the immune system won’t have to go it alone. The researchers hope that by using liposomes, they can make antibiotics more effective at their jobs too, writing in the paper that the liposomes could be used “therapeutically either alone or in conjunction with antibiotics to combat bacterial infections and to minimize toxin-induced tissue damage that occurs during bacterial clearance.”

It all sounds very promising, but there are still skeptics. Frank Martin Brunkhorst, head of clinical trials at the University Hospital of Jena in Germany, told Deutsche Welle, “I’m not sure this could definitely work,” citing previous studies that used liposomes that failed. The researchers of the Nature Biotechnology paper have a ways to go before liposomes are used as treatment in medical facilities; so far they’ve had sucess using their engineered liposomes in mice, but human testing is still a distant goal.