"Hello, I'm a fellow meerkat, and I'll be happy to watch your lunch while you take a break." 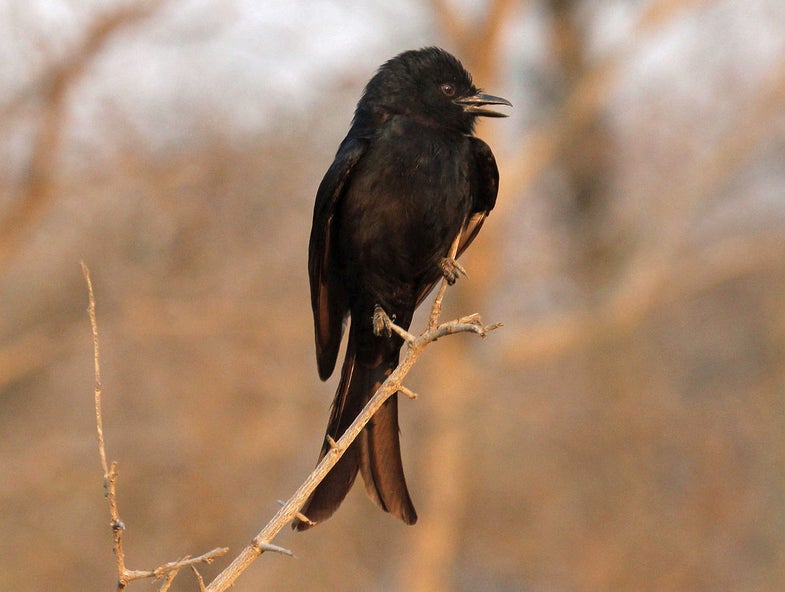 The term “drongo” is sometimes used in Australia to mean dummy or halfwit. But the drongo is also a type of African bird that is certainly not dumb. A new study found that drongos can mimic the calls of 51 different species, which is impressive by itself. Individual birds can also remember as many as 32 calls.

While fork-tailed drongos (Dicrurus adsimilis) often alert other animals to the presence of predators with their alarm calls–which can send creatures like meerkats scurrying away, for example, mid-meal–they also use false alarms to get animals to abandon their food, after which they swoop in and eat it. Their own species’ alarm call often does the job, but if it doesn’t, they switch to the call of another species, often that of the type of animal they are trying to rob. They can mimic many birds and even mammals like meerkats.

Drongos get as much as 23 percent of their daily food using this type of trickery, according to a study published this week in Science.

In the study, the researchers found that by switching up their calls, the drongos were able to keep fooling duped targets. If they kept using the same call, the other animals would soon learn better, perhaps viewing the drongos as the “boy who cried wolf.” But drongos are clever enough to know this, so they learn to sing in many languages, as it were.