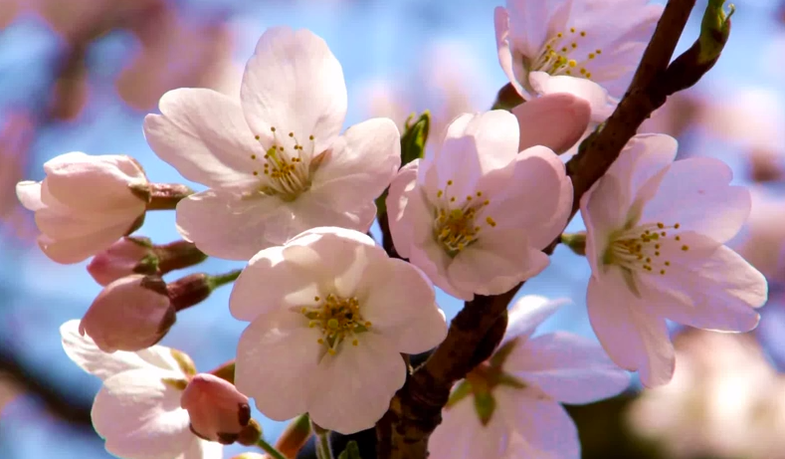 Japanese astronauts took hundreds of cherry tree seeds with them to the International Space Station in 2008-2009, after which they were planted in several locations throughout Japan. About 265 seeds were taken from a celebrated old tree outside a Buddhist temple in Gifu, in central Japan, that is thought to be 1,250 years old. One of the space seeds was sprouted near the temple, but oddly, shot up more quickly then other cherry trees of its variety (that weren’t taken to space). And now the tree is blooming, at four years of age — about six years ahead of schedule. “We are amazed to see how fast it has grown,” Masahiro Kajita, chief priest at the Ganjoji temple, told AFP. The seeds were planted at a total of 14 locations, and blooms have already developed in four locations.

Flowers from the Ganjoji “space tree” also look a bit different, containing five petals, as opposed to about 30 like their parent trees.

The precocious pips have baffled the Buddhist monks and scientists alike. The project was not primarily a scientific one, rather “an educational and cultural project to let children gather the stones and learn how they grow into trees and live on after returning from space,” said Miho Tomioka, a spokeswoman for the project’s organizer, Japan Manned Space Systems (JAMSS). For that reason no “control” seeds were planted to contrast with the space-flown ones–although this cherry variety usually doesn’t bloom until the age of 10.

The reason for the early flowering is a mystery. One guess is that “exposure to stronger cosmic rays accelerated the process of sprouting and overall growth,” said Kaori Tomita-Yokotani, a plant physiologist at the University of Tsukuba who took part in the project. But “from a scientific point of view, we can only say we don’t know why,” Tomita-Yokotani added.