This Chaotic New Cloud Could Be The Coolest Thing Since Cumulus

This raging airmass seems likely to become the first cloud formation the World Meteorological Organization will recognize in more than 60 years.

There is something new under the sun.

Gavin Pretor-Pinney hopes a wild, turbulent cloud he calls “undulatus asperatus” (literally: volatile waves) will emerge as a rare addition to the first new edition of The International Cloud Atlas in four decades. Its strange features are visible as the formation rolls over Lincoln, Nebraska in the time-lapse above.

Pretor-Pinney founded The Cloud Appreciation Society, whose online manifesto asserts that “clouds are unjustly maligned” and pledges to “fight ‘blue-sky thinking’ wherever we find it.” His organization collects images of clouds from amateur photographers who contribute from all over the world, and maintains an impressive online collection. He tells The Verge that he began to notice that the clouds in one small group of photos did not match any known formation. He decided to push for recognition of these clouds as a new type. He passed his findings on to researcher Graeme Anderson, whose paper on the cloud was an important step on the road to official recognition—a step that requires approval from the World Meteorological Organization, whose members edit the Atlas. Anderson defines undulatus asperatus as:

If included in the new cloud atlas, undulatus asperatus will be the first addition since _cirrus intortus _made the cut in 1951. 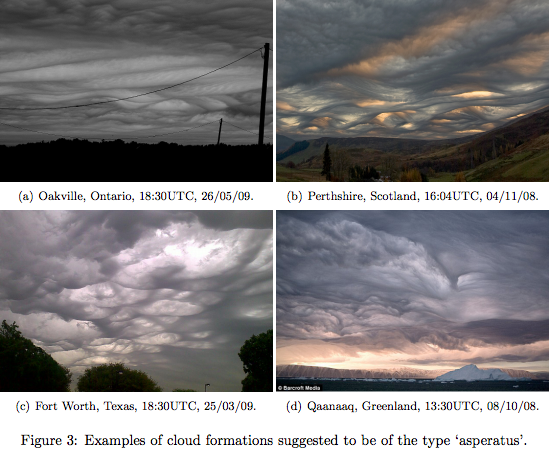