As the seas absorb more carbon dioxide, their pH drops. 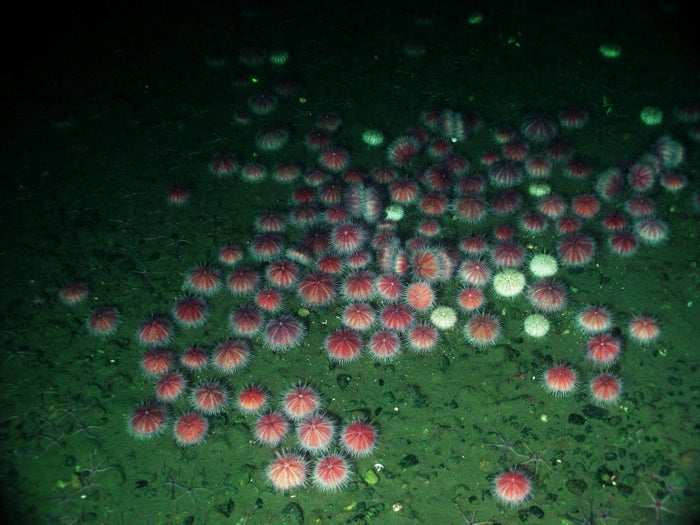 Can sea life evolve fast enough to cope with changing ocean chemistry? That’s the question researchers like Gretchen Hofmann are trying to answer. The marine biologist is applying her years of experience with sea urchins to determining how marine animals might evolve or adapt to ocean acidification: the lowering of the ocean’s pH due to human-propelled fossil fuel emissions.

Her research is at the center of “Sea Change: Can sea life adapt?”, the latest in a series of articles on ocean acidification, published last week in The Seattle Times.

Hofmann, a scientist at University of California, Santa Barbara (UCSB), was inspired to begin the research by a commercial urchin diver, who contacted her to ask how ocean acidification would affect his livelihood. In the lab, she exposed Pacific sea urchin larvae to more acidic water–water with a higher concentration of CO2 than usually found in most real ocean conditions. As the sea urchins grew, she found, many developed smaller bodies. But some did not.

This suggested that something in the urchin genetic code could withstand more acidic waters. Hofmann and UCSB evolutionary biologist Morgan Kelly were able to prove this by interbreeding female sea urchins from Southern California with males from the Pacific Northwest, where a natural upwelling phenomenon has created more acidified waters for millions of years. The offspring of this spiny union had greater genetic resistance to higher-CO2 conditions.

Hofmann and other scientists are guarded about what the findings might mean in the natural world. Not all animals can evolve or adapt to changing conditions at the same rate; some probably can’t adjust at all. And it’s not clear yet where even evolution will hit a wall, given that the oceans are simultaneously acidifying and warming. In short, there are still more questions for science to explore.

Read the entire article, which features amazing photography in addition to excellent reporting. It’s the latest part of an ambitious multimedia series that travels from Washington State to Papua New Guinea, from crabs to oysters to clown fish, to explore how scientists and others are studying the changing ocean and its impacts.