Keep your hands off the whale 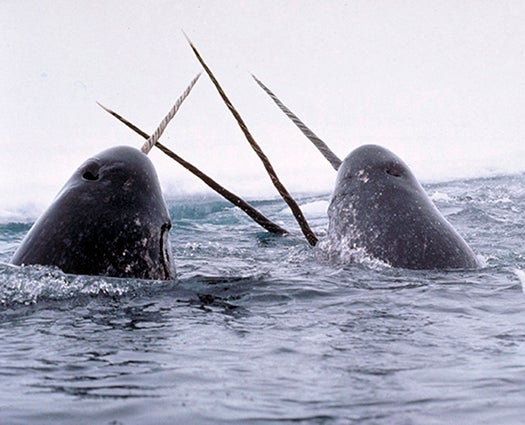 Narwhals are just a bit safer today. A multiyear investigation has resulted in arrests connected with illegal transporting of the whale tusks across international borders. The National Oceanic and Atmospheric Administration’s Office of Law Enforcement, the U.S. Fish and Wildlife Service, and Environment Canada worked together to bring down the smuggling ring.

The male narwhal’s iconic tusk, which is a canine tooth that extends from the left side of the upper jaw and through the lip, makes the species a target of ivory hunters. On the black market, narwhal tusks can be worth thousands of dollars each, depending on size and quality. The narwhal population is near threatened status due to the whales’ inability to respond quickly to changing environments and continued hunting.

According to the National Oceanic and Atmospheric Administration, dealer Gregory Logan of Alberta, Canada, sold more than 400 narwhal tusks to buyers across the U.S. between 2003 and 2010. He has active arrest warrants in the United States in connection with the case, which has so far seen the arrests of three people accused of illegal trafficking of tusks from Canada to the United States. Under the Marine Mammal Protection Act, it is illegal to transport, purchase, sell, or export (or offer to do so) any marine mammal or marine mammal product, unless the intention is public display, scientific research, or enhancing the survival of a species.