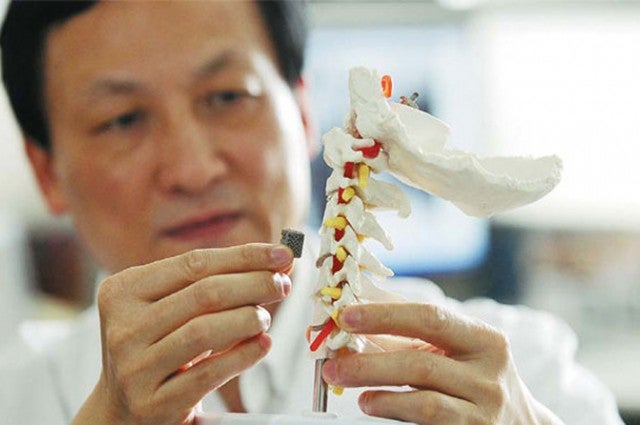 Rather than having a “spine of steel,” a 12-year-old boy in China can now boast something even cooler – a spine of titanium.

Doctors at Peking University Third Hospital have successfully implanted the first ever 3-D-printed section of vertebra into the young patient. The boy, named Minghao, had developed a malignant tumor on his spinal cord, and some of his bones needed to be removed. So, during many hours of spinal cord surgery, surgeons at the hospital replaced part of the cancerous vertebra in his neck with the implant.

Placed between his first and third vertebra, the implant will allow Minghao to lift his head in the coming months. The artificial bones were made with a titanium powder, which is also used in many other orthopedic implants. But, unlike conventional implants, 3-D printed structures are created from a virtual design based on the the patient’s actual vertebra, making them pretty similar to the existing bones and allowing them to integrate more naturally.

It also means surgeons didn’t need to use cement or screws to hold it in place, as they do with traditionally manufactured implants; instead, they made tiny holes in the implant so that surrounding bones can grow into the print and secure it in its spot.

Though this surgery is a world’s first, 3-D printed orthopedic transplants have been gaining momentum within the past couple years. In June 2011, the first 3-D printed jaw was successfully implanted in Belgium, and in April 2013, the Mayo Clinic used a 3-D printer to create a customized artificial hip.

As for Minghao, he had been lying in the orthopedics ward for more than two months before surgery. Five days after the operation, he still could not speak but was said to be in good spirits. He’ll have to wear special gear for the next three months, and it’ll be a while before doctors know how the implant holds up.