Astronauts And Mice Return From Space With Altered Eyes

About one in five astronauts report vision changes after space missions. A new, small study in mice takes a look at what might cause those changes at a molecular level. 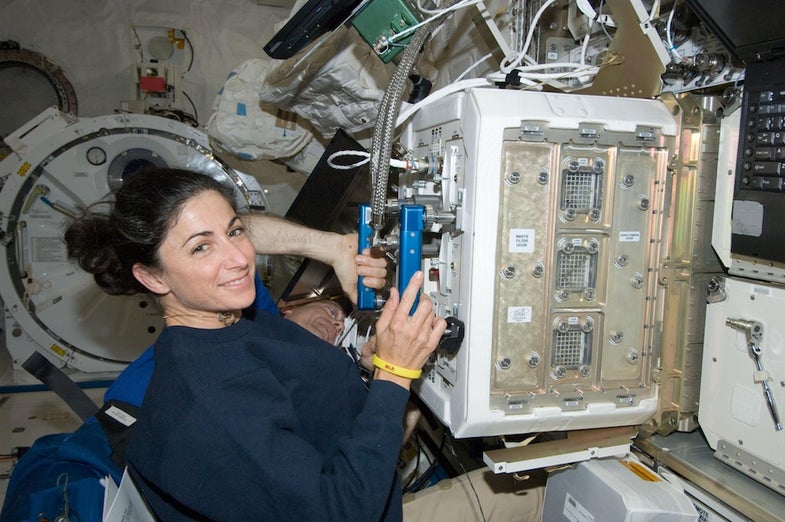 When he rocketed up to the International Space Station in March 2009, NASA astronaut Mike Barratt needed glasses to see things in the distance. When he returned to Earth in October, he no longer had trouble seeing far-off objects—but he suddenly needed reading glasses. By the time he talked with CNN in 2012, his vision still hadn’t returned to normal.

In surveys, NASA has found one in five astronauts report vision changes after space missions. NASA researchers have linked the changes to exposure to microgravity, which increases pressure inside the head and alters the shape of the eye; scientists worry this change in pressure may cause more serious neurological effects. NASA has also studied whether genetic differences between people might make some more vulnerable to eye problems in space than others. Such studies are preliminary, however, and researchers still aren’t sure exactly what’s happening. The agency is examining the issue closely, as it may affect astronauts’ ability to visit Mars and go on other long-term space trips.

Now a new study has looked into what might be happening to astronaut eyes at a molecular level. In a small study, scientists sent six mice to the International Space Station for 13 days. (The little guys rode aboard the last Discovery shuttle mission.) After the mice returned to Earth, the scientists, who came from several Houston research institutes, found the mice’s optic nerves had physical damage. The researchers also saw increased signs of stress in the cells in the mice’s eyes. These signs subsided within seven days after the mice returned to Earth, although the physical damage didn’t heal. The study didn’t extend past seven days after the mice’s return to Earth.

The space mice’s eyes produced more of the molecules associated with brain injury.

The study offers a preliminary look at what might be happening in the eyes of human astronauts, the study’s lead scientist, Patricia Chevez-Barrios, said in a statement. Chevez-Barrios is a doctor of eye diseases with the Methodist Hospital in Houston. Her team pinpointed particular molecules that the space-faring mice produced in greater quantities than similar mice kept on Earth. The space mice’s eyes made more beta-amyloid, which is associated with traumatic brain injury in humans, as well as caspace-3, which is associated with damage to the retina.

There are still many questions about how well these results apply to humans. Humans may suffer more damage than these mice did because they stay in space for much longer during missions. On the other hand, the breed of mouse in this experiment are especially sensitive to light, so some of the damage they suffered may have been from light exposure, not going to space.

Chevez-Barrios and her team will publish their work in the journal Gravitational and Space Biology.