Ask Anything: Why Do Some Birds Chirp While Others Gobble?

Turkey got your tongue? 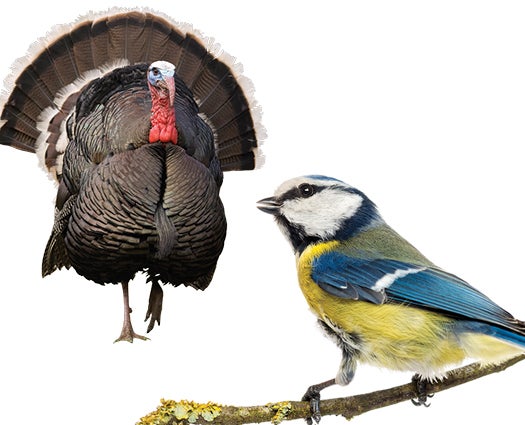 Different bird sounds have different functions. Songbirds use elaborate music to attract a mate or to let rivals know the limits of their territory; other kinds of birds will chirp for food or to communicate a message to their peers, such as the presence of a predator. But there are other factors that determine why songs and calls may not sound so much alike from one species to the next.

First of all, there’s body size. The sound a bird makes depends on the size of its syrinx, the avian organ for making sounds. A big turkey can make its membranes vibrate at lower frequencies, to form a deeper sound. A tiny bird will make high-pitched chirps.

A second difference has to do with the structure of the syrinx. Songbirds have a very intricate one, with two sets of membranes that can be controlled independently. This means they can make two sounds at once. Penguins also have a special syrinx. The organ can produce two different frequencies that come together to create highly individualized calls, similar in distinctiveness to the human voice. (That may be because penguins live in crowded colonies and need to identify their children and their mates.)

Among songbirds, the type of sounds they make vary depending on the habitat. According to Sandra Vehrencamp, professor emerita at The Cornell Lab of Ornithology, a trilling sound doesn’t carry well through heavy vegetation. So those that trill tend to live in marshy areas and grasslands, where there is less interference. Birds that live in forests and jungles emit warbles and whistles instead, which are less susceptible to echo. Similarly, the ground can absorb high-pitched sounds, so birds that skitter in the underbrush tend to use low, whistling sounds. The songs of musical wrens, which live near the rainforest floor, sound like flutes.

Animals
Ask Us Anything
Birds
Wildlife