A team will study how the container has affected sea life since it sank in 2004. 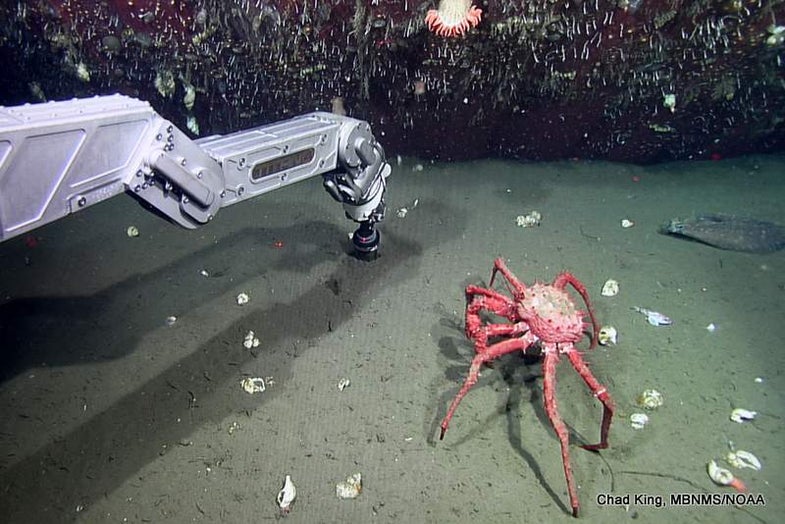 Scientists at the Monterey Bay National Marine Sanctuary are in the midst of an ecology cruise. The team has set sail to explore a shipping container that was lost from a cargo ship during a storm in 2004. At the same time, 23 other containers also went missing, but their whereabouts are still unknown.

Back in 2011, researchers used an ROV to assess the ecological impact of the container, finding that the intruder created an adverse effect to life on the seafloor, in an area that’s 20 times its size. (They also produced a short documentary about it.) This particular container sits about 4,200 feet below the surface, and takes an ROV about an hour to descend to.

Starting earlier this week, MBNMS took another dive to further assess the container and the sea life around it. So far, the Montery Bay Aquarium Research Institute’s ROV, named Doc Ricketts, has provided important imagery and samples, allowing researchers to compare the way the sea life has changed from 2004, to 2011, and to 2013. Another mission priority includes understanding more about any potential toxic effects of the containers’ peeling paint.

“Our initial anecdotal impressions are that the container has more and new life growing on it than it did in 2011,” writes NOAA research specialist, Chad King. “Since many colonies of bacteria dine on sulfides, we are curious if sulfide compounds are leaching out of the container, which apparently contains 1,200 steel-belted Michelin tires. The original rumor was that the container was full of expensive French wine. If that were true, perhaps we would have opened the doors today!”