A Thinking Cap That Boosts Your Brainpower

The Parts A) 9-volt battery: Generates a weak 1.5-milliampere current B) Regulator: Allows researchers to control the electrical juice C)... 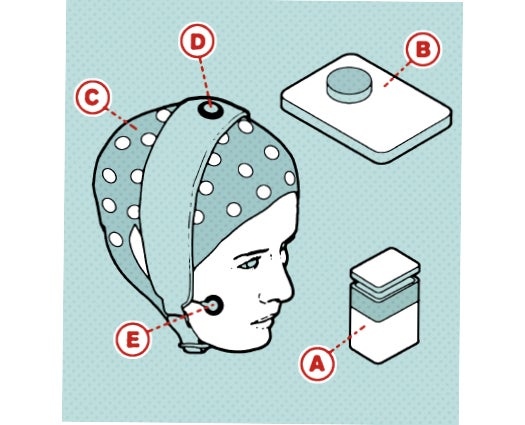 B) Regulator: Allows researchers to control the electrical juice

D) Anode: Directs current through the skull to the medial frontal cortex of the brain

Scientists at Vanderbilt University developed this literal thinking cap to test the notion that a mild current applied to the medial frontal cortex—a brain region that governs adaptive behavior—can speed up learning. “It sounds a bit like snake oil, but electrical-chemical signals are what thoughts are made of,” says neuroscientist Robert Reinhart. “We’re using the language of the mind to ask the question, Can we control the controller?”