And this time it's not on a drone. 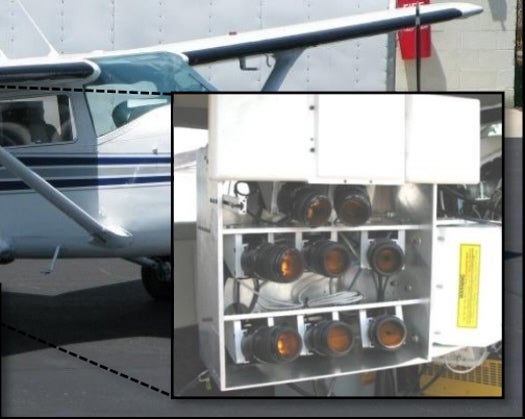 A new surveillance camera system can track movements in a city center for over six hours. Made by the aptly named “Persistent Surveillance Systems,” the HAWKEYE II can watch a 4-mile square, and because it goes on the bottom of a manned airplane like a Cessna, it is, unlike drones, probably legal.

Aerial surveillance as we know it generally involves a single powerful camera watching one spot at a given time. The MQ-1 Predator drones used in America’s targeted killing campaign, for example, are like that, with the camera focusing on a single house. This approach captures great detail, but only a tiny part of the picture.

Persistent Surveillance Systems HAWKEYE II camera system instead uses 12 off-the-shelf Canon cameras, mounted in an array to capture a huge swath of terrain. The array is carried by a commercial plane, which flies at an altitude of between 8,000 and 10,000 feet. The resolution of the final image is less than that from a single camera, but because the HAWKEYE can see such a large area for so long, the composite reveals something new instead: movement.

It turns out that, while an image of a group of people isn’t all the revealing, where those people go next and who travels together reveals a lot. Researchers at MIT were able to identify people from just four location points generated by their cell phones over the course of a day with 95 percent accuracy. A map that captures movement in real time over a large area could capture similar information, watching the places a person goes after he flees the scene of a crime, for example. During the demonstration of the technology over Dayton, Ohio, a man attempted to rob a Subway but failed. Combining that information with the footage from HAWKEYE, however, told police far more about the robber:

Watch a video about the technology below: