The New Chromebook Is Your New Supercheap Laptop 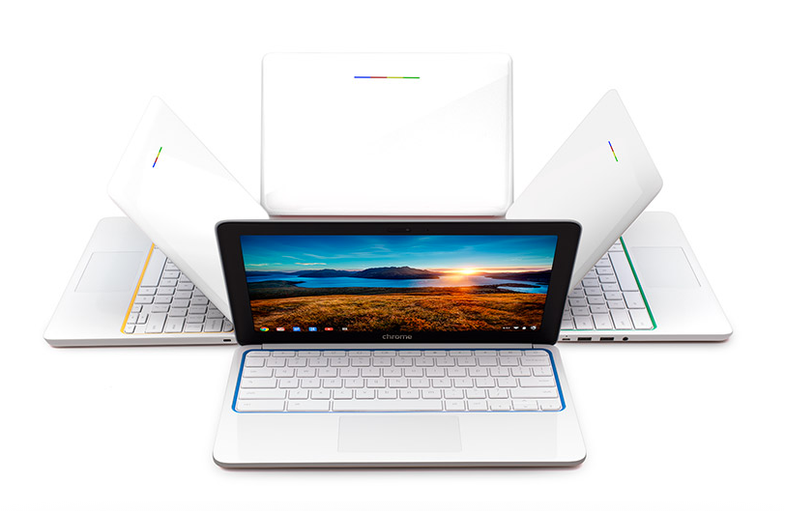 Chromebook is one of the most underrated members of Google’s hardware lineup (which also includes the Nexus line of tablets/smartphones and the Chromecast). The original pitch–a laptop that can only run the Chrome browser, no other programs at all–is not all that enticing, but in practice it’s an excellent low-cost laptop solution. And now Google has updated its best, cheapest model of Chromebook.

Chromebooks look like regular laptops, but run an operating system called Chrome OS. It is, confusingly, not related to Android, Google’s better-known operating system, at all; ChromeOS is basically a glorified web browser, along with a few niceties like a file browser and some settings that affect the hardware (turning on Wi-Fi, screen brightness, that kind of thing). But ChromeOS is surprisingly capable: there are “web apps” (like, super fancy web pages) that let you do pretty much everything you’d need to do on a low-end laptop. There are great Twitter apps, word processing apps, image editors, chat apps, note-taking apps, games, and all kinds of other stuff. I’ve used one for awhile, and found it a great portable machine, much more capable than a tablet.

The newest Chromebook is made by HP. It’s an 11-inch, magnesium-reinforced plastic laptop that’s available in black or white (with the four Google colors as optional accents). It has a fairly nice screen, at 1366 x 768 resolution, and Google claims it’s 50 percent brighter than “most laptops on the market,” which is hard to prove, but it certainly does look nice. The speakers are underneath the keys of the keyboard, which Google says will help sound from being muffled when the laptop is sitting on a surface (the Samsung Chromebook’s speakers are on its bottom). The internals are more like a tablet than a laptop; it uses a Samsung Exynos processor (very fast for a tablet, but low-power for a laptop), has 16GB of storage, and 2GB of memory.

Yeah, it’s a laptop with only 16GB of storage space, so if you’re the type to haul around your entire, multi-hundred-GB music and movie collection at all times, maybe look elsewhere. But if you use Rdio, Spotify, Netflix, and/or Hulu? No need for storage. (Google is also giving 100GB of free cloud storage for two years with the purchase of the Chromebook, though that only works when you have a Wi-Fi connection. Oh, and unrelated, Google’s throwing in 12 free vouchers for in-flight Wi-Fi with GoGo.)

One of my favorite additions is the charging port. Instead of a typical laptop charger, the Chromebook uses a microUSB port, just like your Android phone or Kindle. This is a great idea! Now you don’t have to bring an extra charger with you–or at least you can be fairly assured that wherever you’re going, you’ll be able to pick a charger up that’ll fit your laptop. That’s far from certain with most laptops, and even if you can find a new cord to charge your Lenovo or Apple or Acer, they’re often exceedingly expensive. (MicroUSB cables cost about five bucks.)