How To Win at Microsoft Office 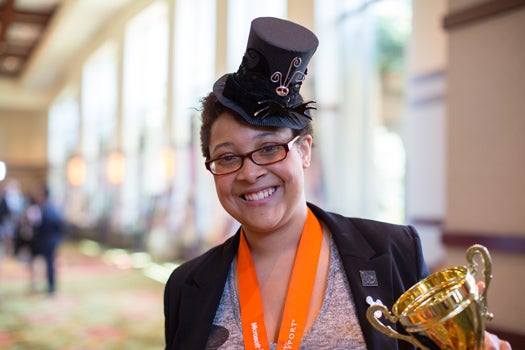 The World Cup. Mortal Kombat. Microsoft Office. What do these things have in common? They’re all battlegrounds for the most epic competitions known to humankind.

Yes, there is a competition for Microsoft Office, and it just wrapped up its 13th year. The goal of the whole thing, which is sponsored by Certiport (a company that provides certification and performance exams for other institutions), is to showcase students with the best office suite skills. This year’s event–the 2014 Microsoft Office Specialist World Championship–attracted more than 400,000 students from 130 countries.

Winning at Microsoft Office is no easy task. Finalists are asked to make a functional recreation of a static image as a Word document, Excel workbook, or PowerPoint presentation in just 50 minutes. Each contestant is scored on accuracy and speed. The challenges test the ability to create, format, and organize content that can be easily read and adheres to any special instructions the exam proctors spell out. In one timed challenge for the Word exam, contestants had to edit a picture of Saturn using only in-software tools–no Photoshop allowed!–and then add elements such as text boxes and tables, all at precise margins and sizes.

A total of 123 finalists competed in the final round held in Anaheim, California. Certiport finished announcing the winners Monday. Dominique Howard, a 21-year-old receptionist at JPMorgan Chase in New York City, became the Word 2007 world champion–the first American woman to win the title.

Besides earning bragging rights, six first-place winners get a $5,000 scholarship. Howard says being a winner definitely increases her marketability as an employee. “It proves that I deserve a raise–a little ‘wink-wink,'” she joked.

Next year’s championship will ditch the 2007 software in favor of the 2013 and 2010 versions of Microsoft Office. Unfortunately–or fortunately?–for Apple and its fans, we have yet to learn of any competitions for iWorks software such as Pages, Numbers, or Keynote.

Alas. Congratulations to the winners! I, for one, welcome our new Microsoft Office overlords. And would very much like them to teach me how to actually use the ‘track changes’ tool efficiently.