A classic from the depths of the Popular Science archives 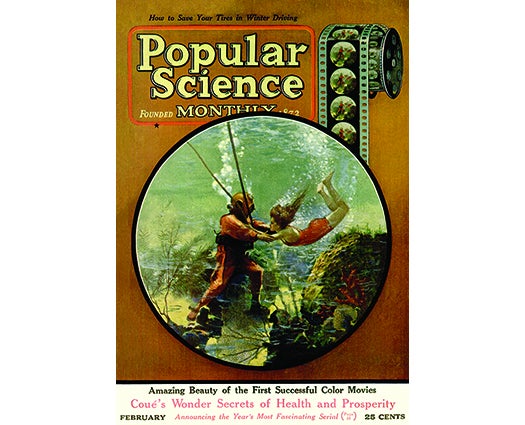 When Popular Science published its February 1923 cover story, underwater cinematography was in its infancy. Less than a decade before, film pioneer J.E. Williamson invented the first device capable of capturing footage below the surface: a steel-and-glass underwater chamber that attached to an accordionlike tube. Adding a more lifelike hue to the industry, Williamson’s first aquatic color film, The Uninvited Guest, came out in 1924. Nearly 90 years later, director James Cameron worked with engineers to develop his own innovation: a submersible capable of taking IMAX-quality 3-D images at the deepest point in the ocean.

The Innovations Behind Underwater Movies

1916: Twenty Thousand Leagues Under the Sea

Photosphere: an observation chamber with enough room for a cameraman and his equipment

The “diving saucer”: a submersible with movable lights and cameras

This article originally appeared in the August 2014 issue of _Popular Science._