CES 2014: Your Next Laptop Keyboard May Double as a Touchpad 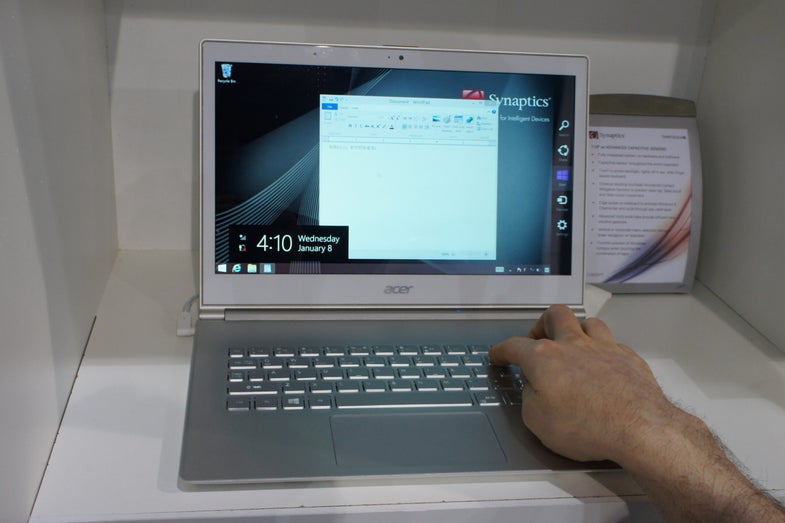 Synaptics makes touchpads for the likes of Lenovo, Dell, and HP, and their touch technology lives inside smartphones made by Samsung and Nokia. So they know a thing or two about touch. But rather than resting on their success, they’re here at CES showing off a keyboard technology, called ThinTouch, which replaces the switches under the keys with magnets that pop the keys back up.

This means the keyboard can be much thinner, while still feeling surprisingly clicky. It also leaves room for adding other components. So Synaptics added touch sensitivity to the entire keyboard area, which lets you perform Windows 8 gestures by swiping across the keys. Slide your thumb across the spacebar and you can scroll through menus or page through documents.

But does that mean traditional laptop touchpads are headed for extinction? Synaptics would rather see them evolve, so they’re teaching them how to take to the air. Their Proximity Touchpad prototype can accurately detect your finger movements as they hover up to three centimeters above the laptop.

There’s certainly a lot of potential here for cool next-generation devices. But in the meantime, we hope the company is also working hard on improving the touchpads in current laptops. We still encounter enough touchpad freak-outs to make us miss our mice while we’re away from the office covering massive conventions.