Just when you thought desktops were passe, Lenovo pulls you back in... 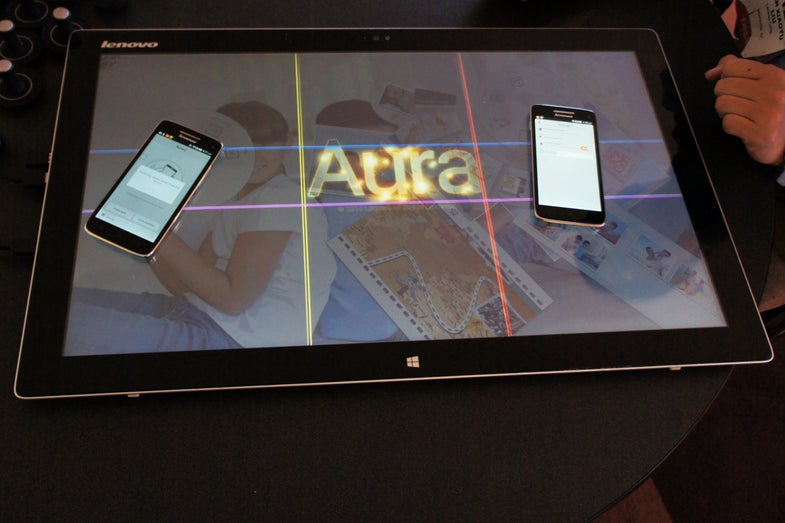 Just when you thought it was time to give up on desktops, Lenovo has made one worth at least a little notice. With a large 27-inch touch display, Intel Core i7 internals, a battery, and the ability to function as a standard iMac-like desktop or dip all the way down to become a massive table-like touch surface, the Horizon 2 is a seriously forward-thinking desktop — a phrase we didn’t think we’d be saying again.

Its most impressive feat is how it interacts with your smartphone or tablet. Install an app, and you can drop your device anywhere on the screen and an interface will pop up around it, showing your recent photos, letting you pull them off the handset and onto the PC. You can also pick your phone up off the screen and shake it, and recent photos “fall” from your phone and appear on the Horizon’s massive display.

Lenovo says they couldn’t accomplish this through standard wireless-transfer means like NFC. Instead, when you drop the phone down, a series of color-changing lines scan across the display for a couple seconds. As the lines slide across your phone’s rear-facing camera lens, the surface records color and timing, telling the Horizon 2 precisely where your phone is on the screen.

With so much focus on mobile computing, the traditional desktop has felt a bit like a dinosaur as of late (outside of gaming circles, at least). But the Horizon 2 feels futuristic and slick — did we mention that it’s also less than an inch thick, even with a battery that’s expected to last about four hours? If the consumer desktop has a future, it probably looks a lot like this.

The Horizon 2 is expected to be available sometime in June, for around $1,500.