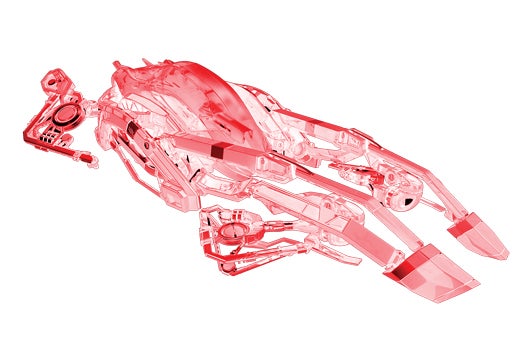 Robert Simons intended to design real cars for a living. But when his sketches drew Holly-wood’s attention during an internship, he turned to sci-fi instead. This year, the 25-year-old concept designer created a weaponized exoskeleton for The Amazing Spider-Man 2. But he’s most excited for the levitating racecar in Momentum, which is due out in December.

How did you get into imaginary vehicle design?

I grew up on job sites with my dad, around backhoes and huge trucks, but I didn’t draw them. I’d look at the parts and draw robots based on them.

What does a concept designer do?

My job is to get the ball rolling. Normally I’ll crank out two or three sketches a day and we’ll go back and forth until we get something the client likes.

Do you ever think about whether these machines would actually function?

Definitely. It’s the only way I could design them. The Momentum team had a friend who worked at [NASA’s Jet Propulsion Laboratory], so we ran everything by him to make sure it made sense.

Your work is mostly digital. Do you ever use paper?

My girlfriend just bought me a sketchbook. I started drawing on it and I thought, “Oh, this is weird. I don’t have an undo button.”

build it yourself
forensic science
September 2014
that's a job