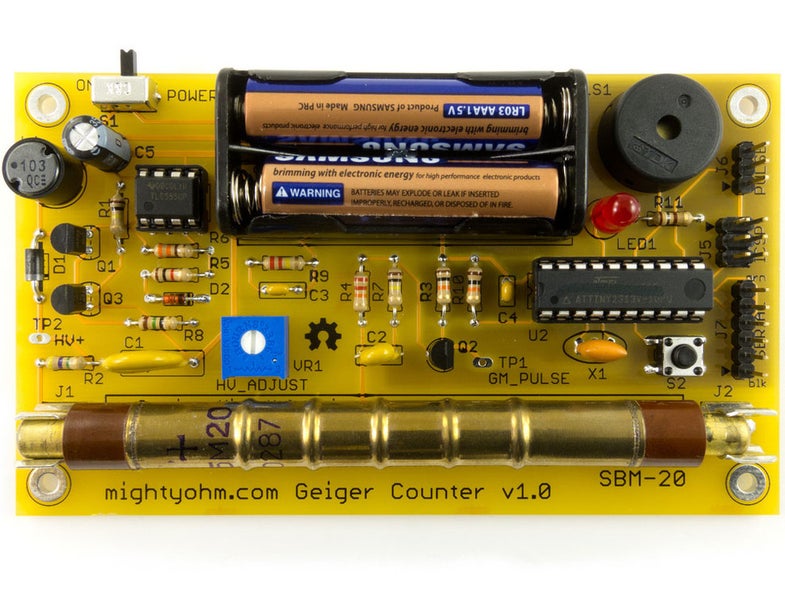 There’s no time like the present to get acquainted with do-it-yourself radiation detection.

In our DIY electronics book Environmental Monitoring with Arduino (EMWA), Patrick Di Justo and I include a project that teaches readers how to connect a radiation detector (also called a Geiger counter, after experimental physicist Hans Geiger) to an Arduino microcontroller, and share its readings on the Internet.

Now MightyOhm has leapfrogged that step with a you-build-it radiation detector that includes an ATtiny2313 microcontroller right on the PCB board. Other nice touches include header pins that make connection with a Raspberry Pi microcontroller an easy matter, enabling easy output of data to a screen (although you could probably attach one directly to the counter as well) or the Internet.

There’s also the option to purchase an assembly-required case, saving makers the trouble of finding or designing their own enclosure to protect those tender electronics from dust, water, and greasy fingers.

The team at AdaFruit, which is selling the kit for just under $100, states that they were able to assemble it “in a couple of hours,” and succeeded in getting readings from everyday stuff that emits rads, like bananas, smoke detectors, and marble countertops.