Toyota Has A Tron Bike 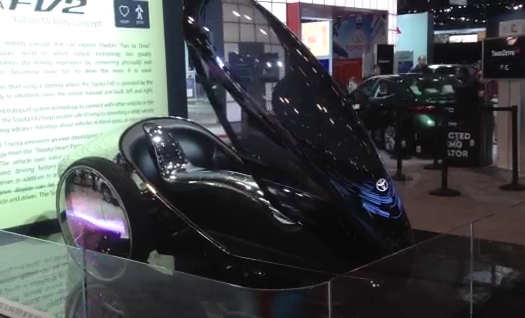 I have made this comparison before, and perhaps will again, but, damnit, this is a _Tron _bike, right? That is, inarguably, what this is.

The FV2 is a concept motorcycle from Toyota, set up only a little ostentatiously at the New York Auto Show. Instead of a steering wheel, the cycle turns when a driver leans into a curve. Instead of tires, it has flashing UFO discs.

And it’ll probably never hit the road. The plans for it are—we’ll say ambitious. The cycle would learn about traffic ahead of jams, and give the driver the data through an augmented reality windshield. The cycle, according to Toyota, would eventually use facial recognition and heart monitoring to determine a driver’s mood, and track usual destinations to help the driver get where they’re going faster.

It’s likely more a sort of automotive think-piece than a real plan for a manufacturable vehicle. But, we can dream.