Why the Wildfires Are Getting Worse

Sunday night, just before the fires in Southern California really started raging, 60 Minutes reported on the new age of... 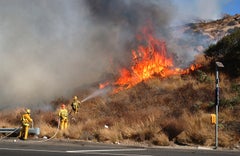 Firefighters battle the flames of the Simi Fire, one of many fires burning in Southern California.

Sunday night, just before the fires in Southern California really started raging, 60 Minutes reported on the new age of “mega-fires”—infernos ten times larger than what we’ve seen before. The last fire season was the worst in recorded history—seven of the ten worst have occurred since 1999—and given the current devastation, this one can’t be too far behind.

60 Minutes talked to University of Arizona fire ecologist Thomas Swetnam, who recently published a paper in Science linking global warming to an increase in the number of fires. The fire seasons are longer, he says, and the blazes themselves are reaching higher into the mountains.

In a joint testimony delivered to Congress just a month ago with Anthony Westerling of the University of California, Merced, Swetnam also warns that forecast models predict increased burning in the event of increased greenhouse gas concentrations. You can watch segments from the 60 Minutes program here, and for more frightening details of Swetnam’s testimony, go here.—Gregory Mone