Google Sky a Hit With Astronomers

Since Google Earth debuted its new Sky function, which allows users to flip their viewpoints and focus on the heavens... 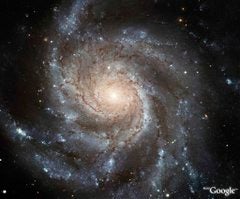 In this image provided by Google Inc., a distant spiral galaxy is shown. A new feature in Google Earth, the company’s satellite imagery-based mapping software, allows users to view the sky from Earth and includes imagery from the Hubble Space Telescope. The product, called Sky, was developed at Google’s Pittsburgh engineering office. (AP Photo/Google Inc.) ** NO SALES **

Since Google Earth debuted its new Sky function, which allows users to flip their viewpoints and focus on the heavens from any point on the planet, a few weeks ago, astronomers have already taken to the project.

A UC Berekely professor used it in his introductory astronomy class at the start of school, and scientists have added details about extrasolar planets, gamma ray bursts, and supernovae. Now users can get real-time updates on these dramatic celestial events captured by the SWIFT observatory and Sloan Digital Sky Survey, among others, every 15 minutes.—Gregory Mone