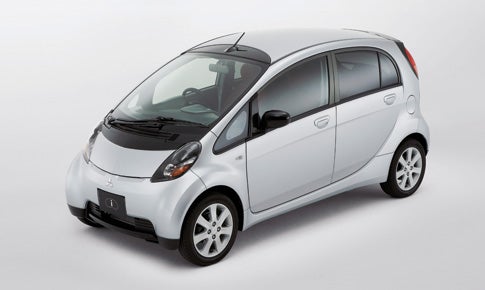 You think a Mini cooper is small? Ha! A third of Japanese drivers buy kei (“light”) cars, which are so compact, owners get a special permit to park free in crowded cities. Kei are 11 feet long, 6.6 feet tall and 4.9 feet wide-or less-and legally limited to 660cc’s and 63 horsepower. (They’re longer but narrower than Smart cars.) Until now, the vehicles were simply shrunken versions of bigger models. But Mitsubishi designed its new “i” model from scratch to make the safest, roomiest and most high-tech kei yet.

Whereas most kei cars are front engine and front-wheel drive, the i’s turbocharged 12-valve all-aluminum 659cc engine-the most oomph with the least heft-sits just behind the rear seat and drives the rear wheels. This configuration gives it snappier handling, and the space liberated in front creates more legroom and wider wheel wells, allowing for a supertight turning radius. The cavity also acts as a crush zone to better absorb the impact of a collision.
The i’s other racecar-inspired upgrades include a full-length flat undertray that reduces drag, as well as variable valve timing mated with a drive-by-wire, or electronic, throttle to maximize mileage. Add to that all-wheel drive and xenon headlamps, in a car that gets 43 mpg and costs $15,000. Oops, make that 1.74 million yen -it’s only sold in Japan.