Hey, is that a satellite radio in your pocket? 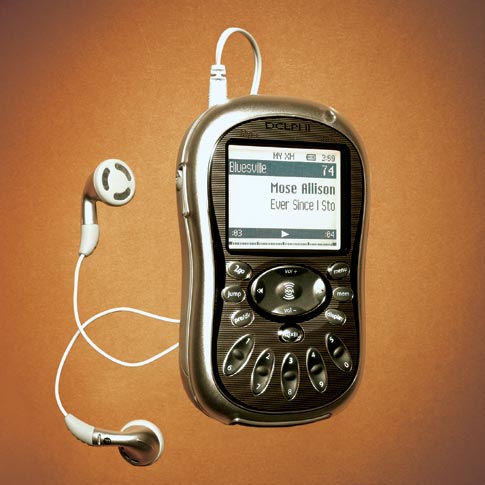 Delphi’s voluptuous MyFi has 30 station presets and an alarm that tells you when your favorite artist is playing anywhere on the dial.

If you’re paying 10 bucks a month for satellite radio, you want to be able to listen to it anywhere. Finally, you can. Delphi’s MyFi for XM service
is the first portable satellite radio. Not only does it receive live broadcasts, it also records and stores programming–greatly broadening the appeal of a service most people associate with car stereos. With its 128 megabytes of internal memory, it’ll hold up to five hours of music, or more if you’re recording less data-intensive talk radio such as sports or news. It means that even if the signal gets dropped–which it will, if you go inside–you can keep listening, albeit to something else. The shapely $350 MyFi (delphi.com) is about twice as thick as an iPod and its rechargeable, replaceable lithium-ion battery provides at least five hours of power. The breakthrough for XM, which designed the unit Delphi made, was squeezing the antenna into the 7.3-ounce body, avoiding the need for a bulky shark-fin protrusion. It comes with a car kit and an accessory antenna strong enough to pull in a signal indoors. It’d be nice if MyFi had the TiVo-like 30-minute-replay feature in XM’s latest car/home unit, but let’s not quibble. With its superior digital signal, breadth of programming and, best of all, dearth of commercials, it still trumps terrestrial radio.