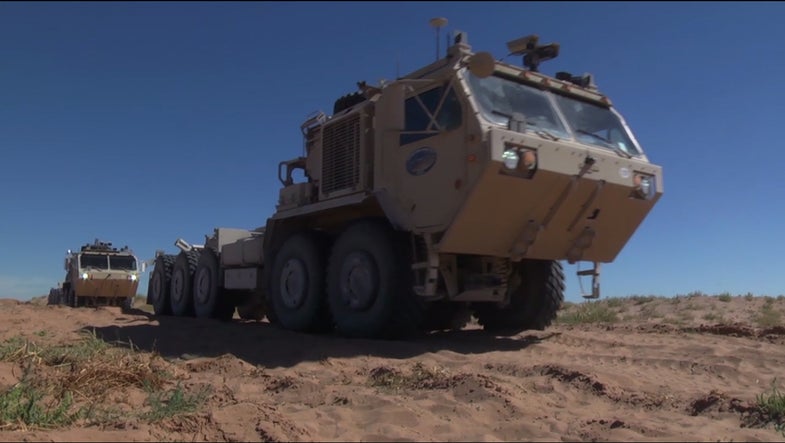 In 2004, as the Iraq war entered its second year, DARPA offered $1 million to the team of robotics engineers who could make a machine cross 150 miles of the Mojave desert. No team succeeded in the first year, and the furthest only covered 7 miles of desert, but five teams completed the course in 2005. Since then, driverless vehicles have taken the civilian world by storm, with autopilot a key Tesla feature and companies like Uber and Alphabet investing in their own autonomous people-carrying machines.

So what happened to the military driverless convoys? They’re busy playing follow the leader.

More precisely, the Army is testing a “Leader Follower” system as part of it’s Advanced Warfighting Assessment exercise at Fort Bliss, Texas. Two humans take control of the main, lead vehicle. And then up to seven other following vehicles are driverless, with autonomous systems guiding them to follow the humans in the lead. That means up to 14 fewer soldiers driving, freeing up their attention for security details instead of navigating the road.

This isn’t the people-free convoy that driverless technology initially promised, but if the Army adopts leader follower tech for its supply vehicles, then turning the extra soldiers from drivers into lookouts and guards is still a significant improvement for security, and for the safety of all those traveling. Driving alone is mentally taxing enough, and driving while scanning peripheral vision for signs of a coming ambush must be harrowing.

Watch a video about the technology below: