Are These Laser-Firing Jets The Next Generation Of Fighters?

Stealthy wings with a hot backside 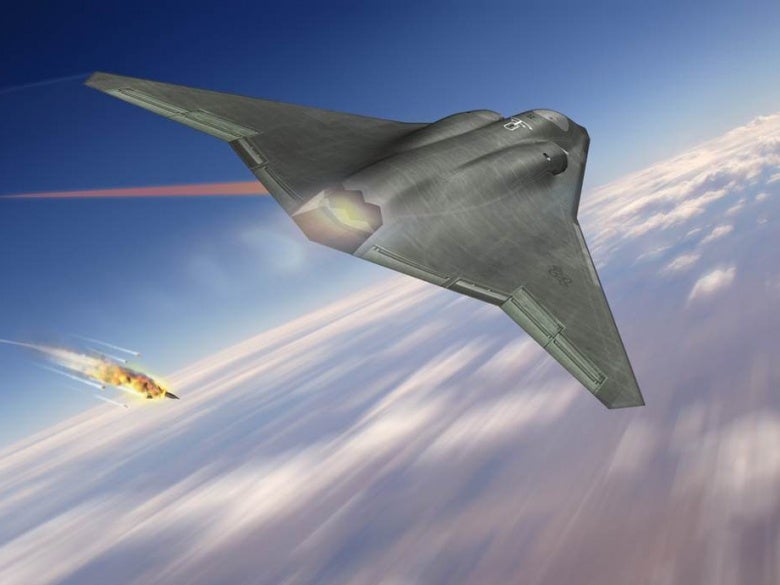 If Northrop Grumman is right, the skies above future battlefields will be full of strange gray wedges firing lasers. The defense giant has released new concept art for their 6th-generation fighter, and it looks as alien as an airplane can while still fitting within the realm of reason. Meant to enter service when the aging F-18 and the current F-22 finally retire, this plane will hide from radar and destroy incoming missiles with onboard laser weapons. That is, if the physics work.

Airplanes generate a lot of heat to begin with, and laser weapons, especially ones drawing on megawatts of power, aren’t exactly cool either. Powering an airborne laser is difficult enough, and a challenge that Northrop Grumman competitors Lockheed Martin thinks is possible but still some innovation away. Even if the power supply problem is solved, there’s the heat problem. An airplane that’s stealthy to radar but gives off a lot of really obvious heat isn’t very stealthy at all.

At FlightGlobal, Stephen Trimble describes the problem like this:

If Northrop solves the heat problem, through whatever the unspecified means are here, and if they can make a laser powerful enough to fire from a plane, they’ll have a stealthy little package likely capable of stopping missiles in-flight and of firing missiles of its own. The whole design borrows a lot from the appearance and experience of the stealthy B-2 bomber, as well as the X-47B unmanned autonomous demonstrator. Both those planes still feel like the future, so it makes sense to borrow from their design to create a next-generation fighter.

We’re still decades away from this fighter’s development, which means we’ll have plenty of time to debate one big question: will there be a human pilot in the cockpit?