From "notes to self" to "self to notes" 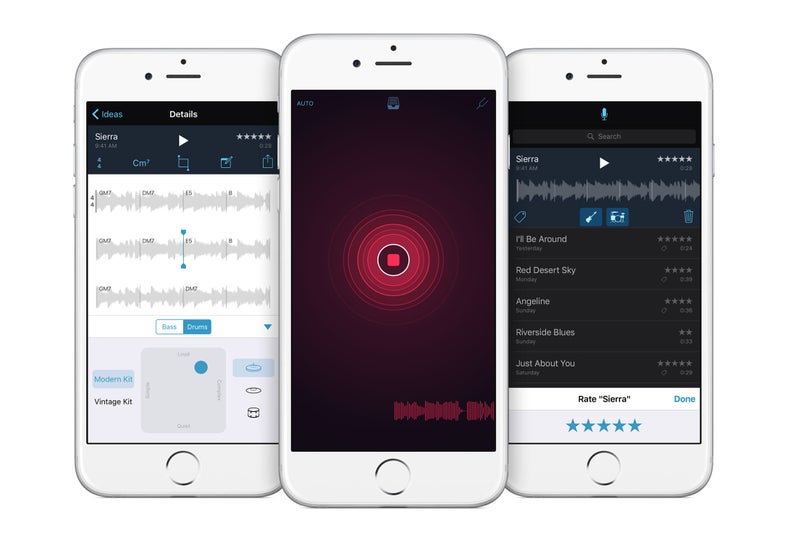 Apple refreshed its music software today, in the form of an updated GarageBand and a new app called Music Memos.

The new Music Memos app is basically a retooled Voice Memos, but with a bunch of great features for musicians. (Don’t worry, Voice Memos is still available, too.) The Music Memos app is geared towards recording little musical ideas; a guitarist can quickly record a riff for later, and then rate and tag it for archiving.

The app also syncs with Garageband, so your sounds can be folded into later compositions (if they make the cut). It’s a mobile portal to Apple’s main Garageband offering, giving the ability to quickly record tracks or ideas for later. Music Memos doesn’t replace anything existing, but formalizes the use of the Voice Memos app for music, and integrates it into Apple’s main GarageBand app.

Music Memos has two killer features: it recognizes the pitch of the notes it records, and it can synthesize other instruments to match with your playing.

The pitch feature is fairly accurate, testing it against online guitar tuners. I “played” an E, and it picked up an E. It got confused when I played a bunch of notes at once, but for most musicians even having the first note is a great help to remembering how to play the riff.

Virtual backing players, a bassist and a drummer, can also be added to recorded files. Music Memos analyses the tempo of your riff, and then adds an appropriately vague drum or bass line.

Music Memos is available for free on iOS today.

This article was updated to reflect the correct name of the app, Music Memos.