The Future Is Calling

A lot of people wonder what the cellphone of tomorrow will look like. We decided to design it 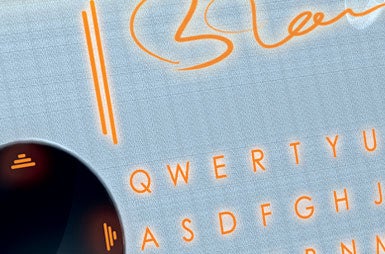 We all expect the cellphone to get smaller while packing in an ever broadening array of functions. The real question is what it’ll look like–inside and outin several years. To find the answer, we investigated dozens of on-the-brink technologies, picking the brains of cellphone product engineers, industry analysts and lab researchers. They told us of cameras that zoom, screens that play Star Wars, and micro fuel cells that deliver days of continuous operation. Some of these breakthroughs are showing up â€ la carte in today’s mobiles, but to picture how they’ll fit together in one slick device, we enlisted the help of Ecco Design (eccoid.com), an industrial design firm that develops consumer electronics for the likes of Apple, LG, Motorola, Sharp and Siemens. Here’s what we came up with and how it will work.

THE GUTS
Communication
Within five years, phones with multiple miniature antennas will seamlessly roam all networks: cellular, Wi-Fi, ultra wideband and whatever’s yet to come. An Intel prototype selects the best option based on network speed and your application. Another approach would use a software-defined radio, which would reconfigure itself to tune in multiple frequencies with a single antenna, dramatically lowering the cost and bulk of a multiband phone.

Storage
By 2008 we’ll be storing eight gigabytes on our cellphone’s 0.85-inch hard drive. The key: Toshiba’s magnetic recording technology, which aligns magnets from top to bottom rather than end-to-end, saving space. With storage on track to increase 30 to 40 percent each year, expect to be filling 60 gigs with high-def movies, thousands of songs and 10-megapixel pics within eight years.

Power
Manufacturers are looking to fuel cells, which would provide about five times the talk time per cycle
of today’s lithium-ion batteries. Hitachi, Toshiba and Fujitsu are working on methanol-based versions for chargers and PDAs by next year. And Nippon Telegraph and Telephone is developing an even more powerful hydrogen fuel cell. Expect it in three years ifand it’s a huge ifthey can devise a small, safe way to store pressurized hydrogen.

A tiny liquid lens with 3x optical zoom and auto-focus will give handsets true digital-camera functionality. An oil-and-water solution between two glass plates changes shape and thus focal length when electric current is applied. Varioptic has shown a version of this lens that can focus on objects as close as five centimeters. The autofocus component will be in Samsung phones this year.

Tune in a local TV broadcast with the phone’s radio anywhere you travel, or stream pay-per-view movies from the Web. This year Nokia begins trials on Crown Castle’s terrestrial TV network, which broadcasts a Digital Video BroadcastHandheld (DVB-H) signal for cellphones equipped with a 1,670-megahertz receiver and DVB-H tuner. Streaming TV-quality video over cellphone networks is a few years out, as carriers finish building out their high-speed data networks and application developers iron out content deals.

1.Holding the phone horizontally, the user pulls a tab to reveal a 3-by-1.5-inch metal frame with no physical screen.

3.A thin layer of nonturbulent water vapor (a by-product of the hydrogen fuel cell) is captured inside the phone and then shot out in a continuous stream to fill the frame. A small projector inside the handset shines the image onto the thin layer of vapor. The idea isnt as farfetched as it sounds: FogScreen (fogscreen.com) currently sells projection screens made of water and ultrasonic waves for large-scale displays at trade shows and events.

5.LED backlit display reveals numbers or letters, depending on the application thats running. The solid-state keys are heat- and touch-sensitive, so theres no need for a key-lock function.