The rumored iPhone 5se could be revealed soon 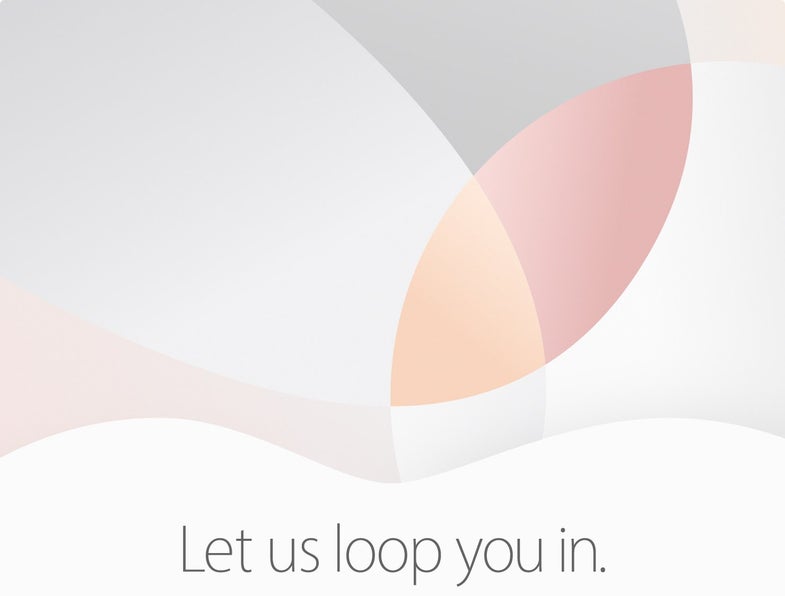 Apple will hold an event on March 21 to showcase new products. Invites were sent out to media for the company’s March event with the tagline “Let Us Loop You In.” Many rumors have pointed to the company’s plans to introduce a new, small screened iPhone 5se device. While Apple tends to save its phone announcements for September, many sites like 9to5Mac and Bloomberg have pointed to similar rumors surrounding an updated version of the 4-inch screen device.

Taking after Android phone makers like Samsung, HTC, LG and more, Apple used its last major hardware revision to increase the size of its devices’ screens. The iPhone 6 and 6 Plus–bearing a 4.7-inch and 5.5-inch screen, respectively–have seen regular updates.

The NFC payment system Apple Pay and optical image stabilization have been among the updates the larger phones have seen. And even more improvements made their way to the “tock update” iPhone 6s. But the 4-inch option has remained at the level of an iPhone 5S–the same phone the company released back in 2013. If rumors are to be believed, that could change with this March 21 event.

The iPhone 5se is expected to have the same 4-inch screen size, but much beefier internal specs than the original 5S. Presumed to stand for “special edition,” the 5se could likely boast an A8 or A9 processor, increased storage space from offering only 16GB and an improved 8MP camera to match up to the iPhone 6 or 6S series of devices. Similar to the 6S, the ability to reveal Siri with only one’s voice could come to the iPhone 5se as well.

But it may not be all about the iPhone — Apple could bring updates to the iPad and maybe even its Mac line of computers at the California event. With the company keeping a tight lid on things as usual, we won’t know for sure until March 21 arrives.

The week will be an eventful one for the iPhone-maker. Those following Apple’s battle with the FBI over decreasing the security of a phone used by one of the San Bernardino shooting suspects know that the company will head to court one day after the March 21 event, at 1pm pacific.

You can tune into Apple’s March 21 event on the company’s devices at 10am pacific, 1pm eastern.