Anti-Cheating Drone Will Hover Over Test-Takers In China 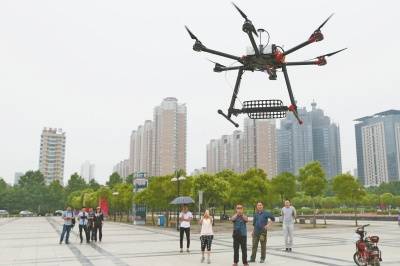 Exams are stressful, so it’s understandable that some people would want to circumvent the hard work of studying by instead cheating. For students taking the national university entrance exams in China, there’s now one more little thing to worry about: drones, deployed to catch cheaters.

The drone is a hexarotor and, as reported by China’s state-owned ECNS news service, it will scan for suspicious radio signals from exam-takers. While that won’t stop any cheaters who use low-tech methods to get around difficult questions, it will detect any number of advanced methods that rely on the test-taker exchanging information with a second party outside the exam room. These methods include cameras hidden in glasses with transmitters hidden in water bottles, cell phones hooked up to flesh-colored wireless headphones, and pen cameras that film the exam-takers’ test.

The anti-cheating drone hovers at 1600 feet above the ground, and can travel 3000 feet from where it’s deployed. If it eavesdrops on a radio signal from one of these devices, the drone forwards the location to operators, who can see where that exam taker is on their mobile device. Cheaters who get caught can face legal penalties. ECNS states that the exam drone led to the arrest of 9 suspects in 2014.

While this drone will likely cut down on cheating, there is also the possibility that it may spur a technological arms race in cheater tactics. Perhaps the exam cheaters of the future will use jamming devices or find ways to mask their signals, or maybe they’ll even revert to older, less detectable methods of communication. Either way, under robotic surveillance, the students will definitely learn a lesson in surveillance.