Antarctica is leaking from the inside out

The Antarctic Ice Sheet is draining huge quantities of water out to sea. 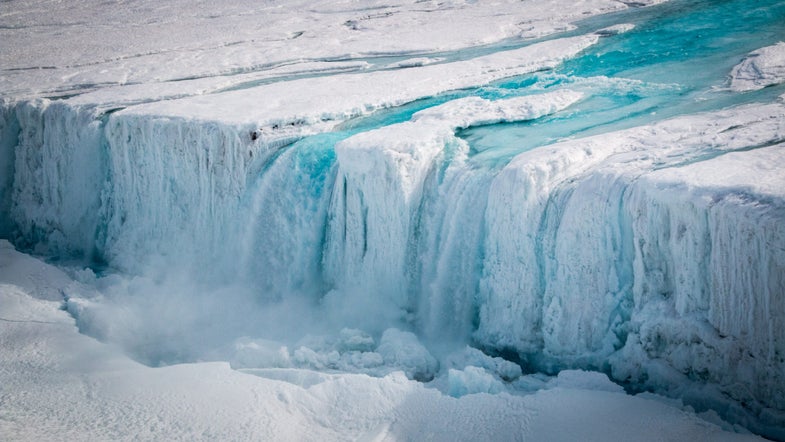 When climate scientists look at Antarctica, they see a ticking time bomb. If the ice sheet melts, it will raise sea levels by tens of feet, flooding coastal cities around the globe.

For now, the southern continent is relatively stable, but it’s starting to look more like Greenland, where rising temperatures are melting the island from the inside out.

For decades, Greenland primarily melted around the edges. Giant blocks of ice would break free from the coast and vanish into the ocean. Recently, however, Greenland has started melting from the middle. Pools of water are forming atop the ice sheet in the warmer months and then draining out to sea.

Scientists have now discovered the same thing is happening in Antarctica. Two new studies published in the journal Nature catalogue the melting and explain what it could mean for sea-level rise.

In the first study, researchers examined decades of photos from satellites and military aircraft. They documented hundreds of meltwater channels around the perimeter of the continent. They traced some streams deep into Antarctica’s frozen interior and discovered ponds of meltwater more than 4,000 feet above sea level, where no one expected to find liquid H2O.

In some places, the terrain had contributed to the melting. Blue ice and dark mountains absorb more sunlight than the white snow. These features gathered the extra heat needed to thaw Antarctic ice.

“Even though people kind of knew there were melt ponds around, they really didn’t know that water could move long distances across the surface,” said Jonathan Kingslake, a glaciologist at Columbia University and lead author of the study. He said that streams “take water away from the surface of the ice sheet and actually export it all the way into the ocean… And we didn’t really realize this happened at all.”

Ice shelves along the edge of the continent are holding back massive, terrestrial glaciers. As the shelves break up, they allow glaciers to slip into the ocean. Meltwater may, in some instances, lubricate the underside of the glacier, hastening its passage to the sea. Meltwater can also burrow into the ice shelf, cleaving apart large chunks of ice. This is what’s happening to the Larsen C Ice Shelf, which is expected to break off the continent soon.

Kingslake said the drainage systems appear “quite stable at the moment. But the predictions for the future — for this century — are that melt rates will double in response to global climate change.” He said that “what we really need to know is how is that going to impact the stability of the ice sheet and our predictions of sea-level rise.”

The second study, which Kingslake co-authored, attempts to answer that question.

But, Bell said there are signs of hope. She noted that meltwater channels have kept West Antarctica’s Nansen Ice Shelf intact. That’s because water is draining to the ocean rather than amassing on the surface, where it would warm up the ice and trigger further melting.

“Plumbing on our planet matters, and plumbing on the top of the ice sheet matters,” said Bell. The water on the Nansen Ice Shelf isn’t gathering into pools or “falling into these crevices that then pop open. Instead, it’s exiting stage right down this very subtle river valley.” The runoff has a negligible effect on sea levels.

Antarctica is contributing to sea-level rise in other ways, shedding chunks of ice around the edges. Between 2002 and 2016, Antarctica shed 100 gigatons of ice per year — nearly enough water to fill Lake Ontario. Antarctica — like Greenland — is less stable than previously thought. Recent research suggests climate change could raise sea levels by six feet by the end of this century, and by tens or even hundreds of feet in the centuries to come. New research on meltwater complicates scientists’ projections.

“We’re working hard to figure out if this stuff is relevant to sea-level predictions,” said Douglas MacAyeal, a glaciologist at the University of Chicago who was not involved in the studies. He noted that, until recently, “nobody’s been that interested in melting,” because it was thought to be extremely rare in Antarctica.

Scientists will need to better understand the inner workings of the Antarctic ice sheet to forecast sea levels in the decades to come. What happens on the southern continent rarely stays there. Melting glaciers threaten to deliver floods to New Orleans, Miami, New York and beyond.

“This might delay how fast the other parts of Antarctica go,” said Bell, “but it doesn’t mean that Antarctica isn’t susceptible to changing temperatures.”