Yes, There Are Neutrinos Zipping Through The Cosmos 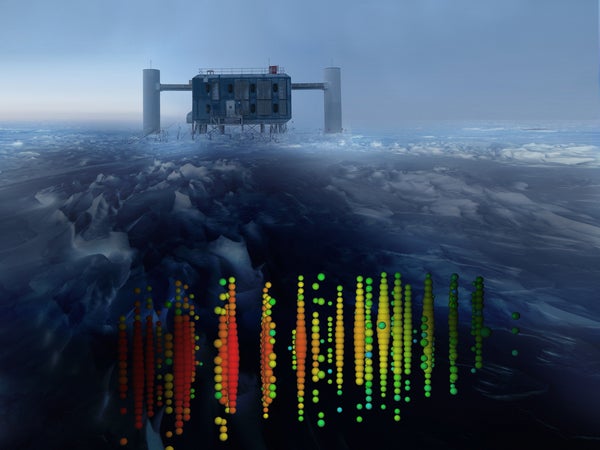 Back in 2013, the scientists running the IceCube Neutrino Observatory in Antarctica were pretty sure they had found what they were looking for: cosmic neutrinos, neutrally charged subatomic particles that can give researchers insights into some of the universe’s most mysterious machinations. After sifting through all the data, the researchers are now even more certain of their findings, according to a paper published today in the journal Physical Review Letters.

Neutrinos are made from radioactive decay in some of the highest-energy spots in the universe, like black holes and exploding stars, and yet they pass through molecules constantly without affecting them. They can act as “astronomical messengers,” as IceCube lab’s web site notes, carrying unadulterated information about their sources across the universe.

But every once in a while neutrinos collide with other particles, emitting a tiny spark. And the IceCube lab has been uniquely positioned to detect them, with thousands of optical sensors deep in the Antarctic ice. IceCube recorded over 35,000 reactions in two years. Though the researchers initially thought they had only detected two high-energy events, this recent study confirms that they had in fact detected about 20. They had found the cosmic neutrinos they were looking for.

In theory, IceCube’s observations could trace the neutrinos all the way back to their source. That could tell astronomers a lot about how the neutrinos were made, about the early universe, and about the inner-workings of black holes and star clusters at the center of galaxies. In short, the discovery “heralds a new form of astronomy,” in which researchers trace neutrinos’ trajectories, as the press release states.