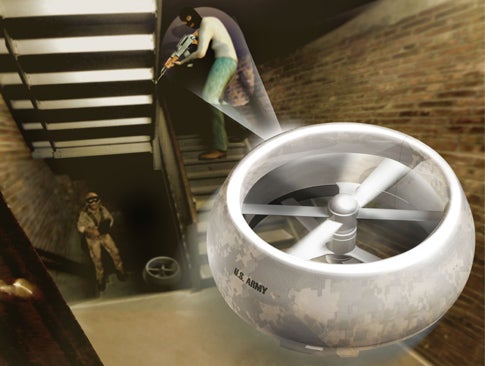 American soldiers have a bevy of hand-launched unmanned aerial vehicles to choose from these days, but nothing quite as nimble, lightweight and cheap as the Stevens Institute of Technology’s unmanned helicopter. The chopper would allow soldiers to check tall buildings for enemies by flying the camera-equipped, remote-controlled helicopter up staircases and into hidden corners before they go in. The four-pound prototype is made of a doughnut-shaped fiberglass shell 18 inches in diameter; inside, two counter-rotating 14-inch rotors create lift.

Right now, the prototype can fly only up to four feet high, though the addition of a small gasoline engine and a few other tweaks should enable it to fly up to 100 feet—high enough to scope out a 10-story building. A single operator can control the whole thing remotely while a 360-degree rotating camera sends real-time video back to a laptop receiver. “This could save lives,” says team member Brandon McWhinnie.

WHAT’S NEXT Because the design was funded by the college, this class will pass the torch on to next year’s team, which will continue to work toward a fully functional product.