Why do snakes flick their tongues?

The answer is hidden in the air around them. 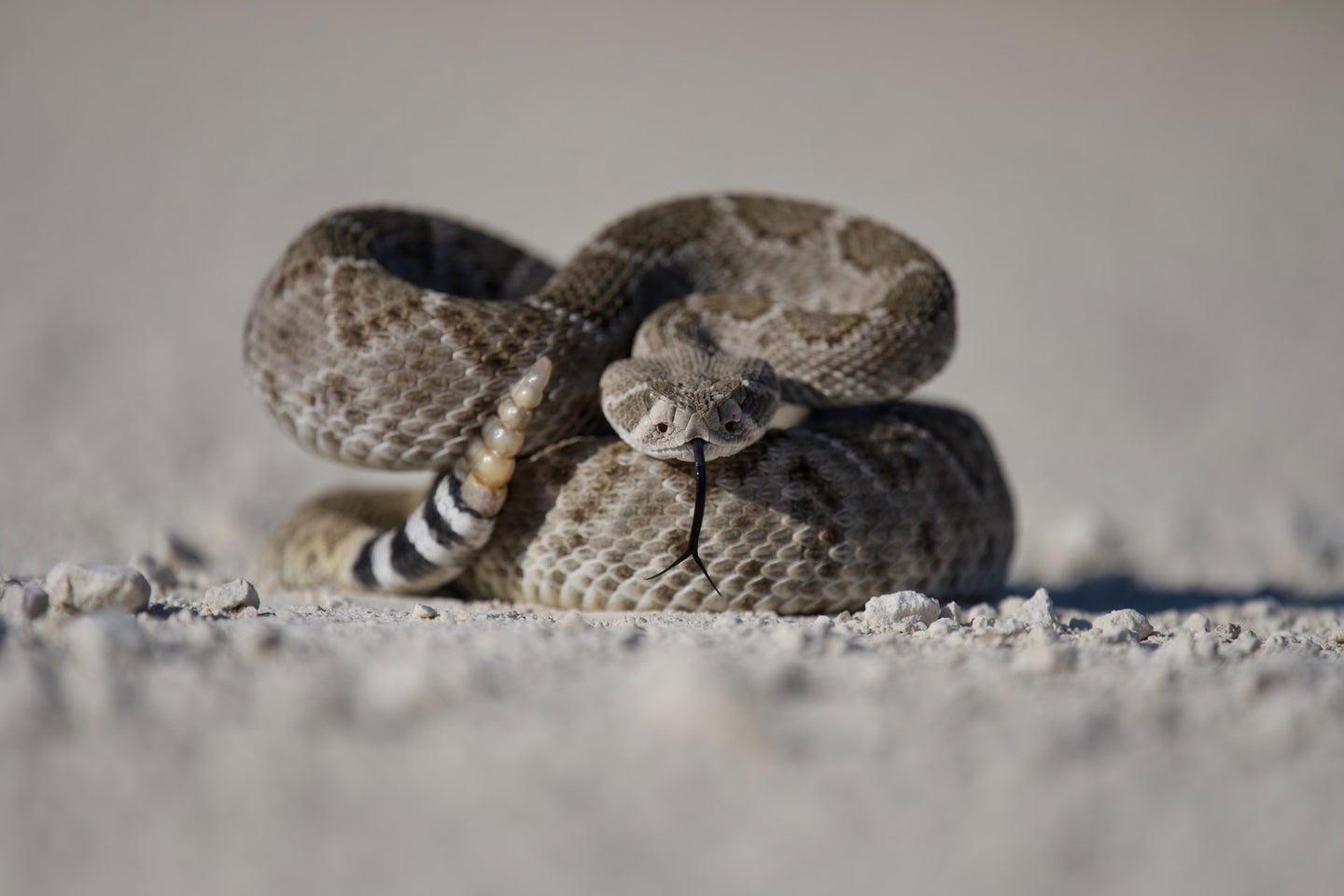 Snakes have always had a mysterious air about them. Duncan Sanchez/Unsplash
SHARE

Kurt Schwenk is a professor of Ecology and Evolutionary Biology at the University of Connecticut. This story originally featured on The Conversation.

As dinosaurs lumbered through the humid cycad forests of ancient South America 180 million years ago, primeval lizards scurried, unnoticed, beneath their feet. Perhaps to avoid being trampled by their giant kin, some of these early lizards sought refuge underground.

Here they evolved long, slender bodies and reduced limbs to negotiate the narrow nooks and crevices beneath the surface. Without light, their vision faded, but to take its place, an especially acute sense of smell evolved.

It was during this period that these proto-snakes evolved one of their most iconic traits—a long, flicking, forked tongue. These reptiles eventually returned to the surface, but it wasn’t until the extinction of dinosaurs many millions of years later that they diversified into myriad types of modern snakes.

As an evolutionary biologist, I am fascinated by these bizarre tongues—and the role they have played in snakes’ success.

A puzzle for the ages

Snake tongues are so peculiar they have fascinated naturalists for centuries. Aristotle believed the forked tips provided snakes a “twofold pleasure” from taste—a view mirrored centuries later by French naturalist Bernard Germain de Lacépède, who suggested the twin tips could adhere more closely to “the tasty body” of the soon-to-be snack.

A 17th-century astronomer and naturalist, Giovanni Battista Hodierna, thought snakes used their tongues for “picking the dirt out of their noses … since they are always grovelling on the ground.” Others contended the tongue captured flies “with wonderful nimbleness … betwixt the forks,” or gathered air for sustenance.

One of the most persistent beliefs has been that the darting tongue is a venomous stinger, a misconception perpetuated by Shakespeare with his many references to “stinging” serpents and adders, “Whose double tongue may with mortal touch throw death upon thy … enemies.”

According to the French naturalist and early evolutionist Jean-Baptiste Lamarck, snakes’ limited vision obliged them to use their forked tongues “to feel several objects at once.” Lamarck’s belief that the tongue functioned as an organ of touch was the prevailing scientific view by the end of the 19th century.

Clues to the true significance of snake tongues began to emerge in the early 1900s when scientists turned their attention to two bulblike organs located just above the snake’s palate, below its nose. Known as Jacobson’s, or vomeronasal, organs, each opens to the mouth through a tiny hole in the palate. Vomeronasal organs are found in a variety of land animals, including mammals, but not in most primates, so humans don’t experience whatever sensation they provide.

Scientists found that vomeronasal organs are, in fact, an offshoot of the nose, lined with similar sensory cells that send impulses to the same part of the brain as the nose, and discovered that tiny particles picked up by the tongue tips ended up inside the vomeronasal organ. These breakthroughs led to the realization that snakes use their tongues to collect and transport molecules to their vomeronasal organs—not to taste them, but to smell them.

In 1994, I used film and photo evidence to show that when snakes sample chemicals on the ground, they separate their tongues tips far apart just as they touch the ground. This action allows them to sample odor molecules from two widely separated points simultaneously.

Each tip delivers to its own vomeronasal organ separately, allowing the snake’s brain to assess instantly which side has the stronger smell. Snakes have two tongue tips for the same reason you have two ears—it provides them with directional or “stereo” smell with every flick—a skill that turns out to be extremely useful when following scent trails left by potential prey or mates.

Fork-tongued lizards, the legged cousins of snakes, do something very similar. But snakes take it one step farther.

Unlike lizards, when snakes collect odor molecules in the air to smell, they oscillate their forked tongues up and down in a blur of rapid motion. To visualize how this affects air movement, graduate student Bill Ryerson and I used a laser focused into a thin sheet of light to illuminate tiny particles suspended in the air.

We discovered that the flickering snake tongue generates two pairs of small, swirling masses of air, or vortices, that act like tiny fans, pulling odors in from each side and jetting them directly into the path of each tongue tip.

Since odor molecules in the air are few and far between, we believe snakes’ unique form of tongue-flicking serves to concentrate the molecules and accelerate their collection onto the tongue tips. Preliminary data also suggests that the airflow on each side remains separate enough for snakes to benefit from the same “stereo” smell they get from odors on the ground.

Owing to history, genetics and other factors, natural selection often falls short in creating optimally designed animal parts. But when it comes to the snake tongue, evolution seems to have hit one out of the park. I doubt any engineer could do better.