A hidden second set of jaws enables them to gobble prey on land. 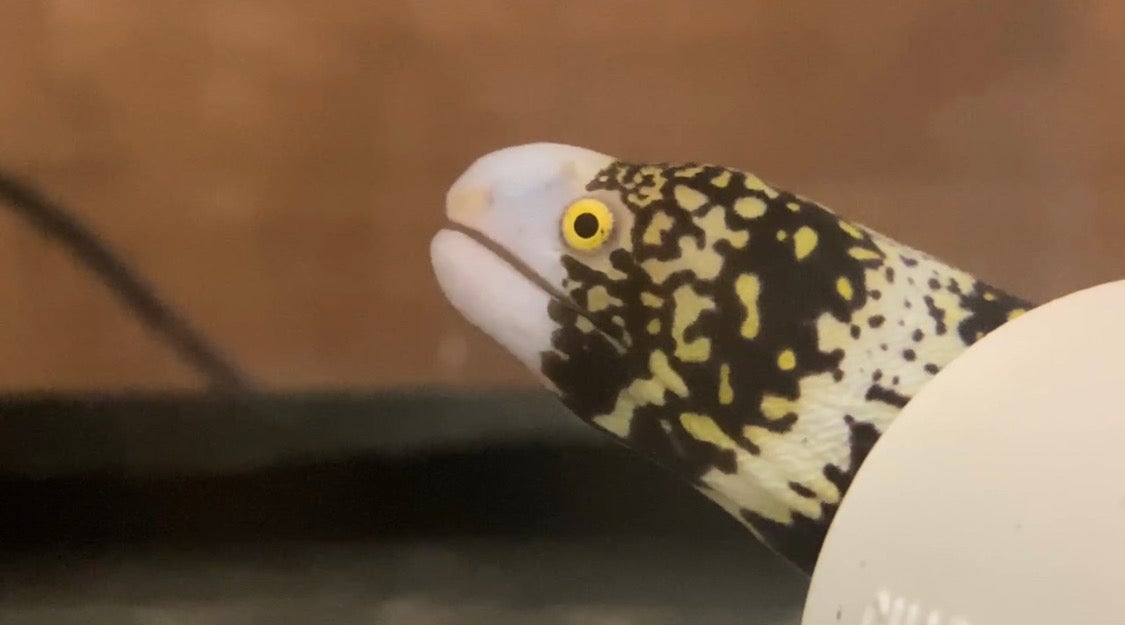 Most fish are suction feeders, and require water to help usher food into their bellies, but the snowflake moray overcomes this with its unique physiology.
SHARE

In research video footage a snowflake moray eel (Echidna nebulosa) winds itself up in the water and launches onto a ramp, towards a morsel of squid. Once the meal is partially in its mouth, a second set of jaws somewhere in the eel’s throat clamps down on the squid, pulling the food down the fish’s gullet. The eel gently slides back down into the water, satisfied.

Besides the simple joy of seeing a cartoonish eel have its lunch, this video provides a remarkable look at how the snowflake moray succeeds at feeding out in open air. Most fish are suction feeders, and require water to help usher food into their bellies, but the snowflake moray overcomes this with its unique physiology. These eels actually have two sets of jaws. When they are ready to feed, the eels open up and push their second jaws, or the “pharyngeal jaws,” forward from their throat. The pharyngeal jaws then clamp down and pull the food back as the eel’s body elongates again—kind of like how one would guide a drawstring through a waistband.

The research is the first to show how this dual jaw action allows snowflake eels to feed just as effectively on land as in the water. Their findings were published in the Journal of Experimental Biology.

Rita S. Mehta, the study’s main author, first inspected morays’ pharyngeal jaws in 2007. But after hearing reports of snowflake eels snapping up prey on shore, she wanted to revisit the fish and investigate how they feed on land. She said in a statement, “I would see reports in the literature of them moving out of the water and lunging for crabs, but it was unclear what happened next.”

To find out, Mehta needed to train eels to not only find food on land, but fully swallow it while staying out of the water while being filmed in the act. Over six years, Mehta, her co-author Kyle Donohoe, and various students would use reinforcements to train morays to feed on the ramps inside their custom tanks. Mehta told The New York Times that seeing the robustness of eel memory was one unexpected insight of the experiment.

Moray eels’ pharyngeal jaws were first documented by ichthyologist Gareth Nelson in 1967. Nelson studiously dissected and diagrammed the fish’s muscles and proposed that they protracted and retracted specifically to pull prey down eels’ throats, though he had no proof. 50 years later, scientists have evidence that this mechanism isn’t just correct, but it even works on land.

While the mechanisms of morays feeding on land have been newly confirmed to science, Lana Sinapayen, an artificial life researcher not involved in the study who grew up in the Caribbean island of Martinique, told The New York Times that locals have long known of their land hunting abilities. In fact, she remembers, local fishermen often caught morays by placing squids on the shore and waiting for the eels to arrive.

is a freelance science journalist, podcast writer, and poet based in Brooklyn. In addition to Popular Science, her work can be found in WIRED, Scientific American, The Walrus, and Environmental Health News, among others.