A patch will fix the problem, but not until early next month 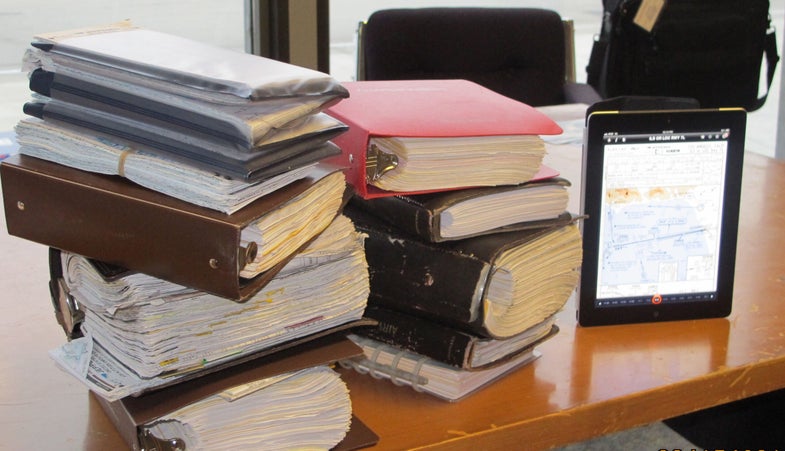 Usually, technology enhances our lives–but sometimes we can become overly reliant on it. Take the iPad, which has become the device of choice for many commercial pilots’ flight bags. Many airlines use special iPad apps to help consolidate all the manuals for an aircraft, aeronautical and navigational charts, logbooks, and other equipment. But earlier this week, American Airlines flights were delayed when the iPad app used by American glitched.

That glitch, which affected “a few dozen flights” according to an American spokesperson, produced duplicate charts for Ronald Reagan Washington National Airport, causing the app to freeze and become unresponsive. As a result, the apps couldn’t retrieve the appropriate flight plans, effectively grounding an assortment of flights across the fleet.

Jeppesen, the Boeing-owned company that makes the iPad app for American, will be issuing an update on May 8. In the meantime, pilots are being encouraged to use a PDF version of the troublesome map, or remove and reinstall the app, which also apparently fixes the issue. Alternatively, pilots can fall back to the good old fashioned dead-tree version of their flight bag, which may not seem like a big deal until you realize that those collections of manuals and gear can weigh around 35 pounds.

Eliminating paper flight manuals and the like has allowed airlines to make savings on fuel, due to reduced weight. But this incident serves as a reminder that technology is hardly foolproof, and though it’s easy to swap out an iPad for a paper flight bag while on the ground, that’s considerably harder in flight. Still, given the advantages of the electronic flight bag over its paper-based counterpart, it’s hard to imagine airlines making any move to switch back.

So don’t be shocked if some day the flight crew comes onto the intercom and asks if anybody on the plane is an IT expert.

This article was updated at 6:56 p.m. Eastern to clarify a number of details about the glitch.