All the gadgets the tech giant just announced. 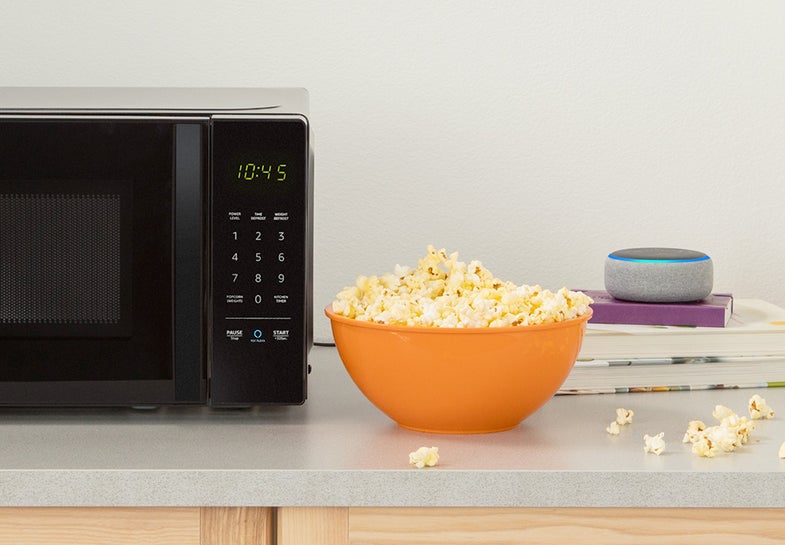 Amazon announced a lot of new stuff today. It’s the new-tech season, after all, with Apple dumping its gadgets on us last week, while Microsoft and Google are readying new products they intend to announce in the next couple weeks. But while other companies are opting for a precise approach to releasing new stuff, Jeff Bezos and company at Amazon have opted for the carpet bomb approach. In fact, there are new fewer than 17 new Amazon objects to digest today. That’s a lot.

While it’s not often we see a company announce this much stuff at once—at least outside the bounds of the annual Consumer Electronics Show—this is the move that we should have expected from the online retail giant. The objective of “get Alexa into as many homes and rooms as possible,” has been a clear one for roughly two years. So, when you hear that Amazon’s new microwave works with Alexa, it might make for an easy punchline on Twitter. But when you’re trying to break down every possible wall between consumers and the ability to buy stuff from your company, no integration seems too weird.

Here’s a list of the new stuff Amazon announced today, as well as some insight into what these shiny new gadgets might mean for the gadget market going into the holiday shopping bonanza of 2018.

As previously mentioned, yes, Amazon did announce a microwave today, but reports of it “having Alexa” aren’t totally accurate. The $60 microwave does pretty much what you’d expect—heats up food you want to eat but don’t really care enough to cook properly. Who doesn’t love a Hot Pocket now and then?

But, it does, however, have Alexa compatibility built-in. That doesn’t mean it will work as an Echo speaker, but rather that a nearby Echo device can send commands to the microwave. Amazon’s senior VP of devices claims its because the microwave interface is “stuck in the late ‘70s.” In Amazon speak, that means it uses buttons instead of voice and doesn’t allow you to directly buy stuff from Amazon. In fact, the new Essential microwave has an integrated Amazon Dash feature that can re-order popcorn when you run out.

It’s also built on the new Alexa Connect Kit, which the company hopes developers will use to bring more gadgets into the Alexa ecosystem with less friction. A microwave that sends for more popcorn is silly, but a washing machine that re-orders detergent or a dishwasher that orders more soap makes more sense.

There are already ways to get Alexa in your car, but now there’s officially an Echo device designed to chill in your automobile. The $50 device will be invitation-only at first, and will cost just $25 for early adopters. Its primary function is to enable the new location-based Routines, which are group of actions that happen when you’re in a specific place. So, if you wanted lights to turn on or music to play when you get home from work, this extra Echo would help enable that.

Amazon Echo Dot and Echo Plus

The Echo Dot is the cheapest way to cram Alexa into your home. But, it’s not a pretty device, even for a $50 gadget. The new Echo dot, however, looks a lot more modern with a rounder body and a fabric wrap. It looks a bit like a squashed Apple HomePod.

The Echo Plus is the other Echo device to get a new look, including a similar fabric wrap to the Dot, as well as a temperature sensor.

If the $50 Dot is still too complicated or expensive for your taste, then the $35 Echo Input adds Alexa functionality a speaker you already own. It connects via Bluetooth or headphone jack and it doesn’t have a speaker of its own.

Multi-room audio has been in Alexa’s repertoire for a while now, but the company is starting to take its role as a Sonos competitor more seriously. The Echo Sub is a $130 subwoofer that adds some much-needed bass to Echo-based sound systems. Add stereo pairing to the equation on typical Echo speakers and you can make yourself a 2.1-channel sound system for less than the price of a $699 Sonos sub. It will ship on October 11th.

Like I said, Amazon is trying to home in on the high-end wireless audio space. The $300 Echo Amp is an amplifier meant to push sound out to a pair of high-end speakers. The $200 Echo Link hooks up to your existing AV receiver so you can use your current gear.

There’s no shortage of smart plugs on Amazon already, but now you can get the official Alexa plug right from the source. The $25 plugs will turn on and off via voice command and you can rope them into coordinated routines. So, if you want your coffee maker or another dumb appliance to turn on at a certain time, this little box will let you do it.

Setting timers is one of the most common uses for an Alexa device, and this traditional-style clock has LED indicators to show you when your timers and alarms are set to go off. It’s only $30 and it’s not bad-looking, but it certainly seems like a luxury item unless your old clock breaks and your house isn’t close enough to the cathedral to hear the bells chime each hour.

The old Echo Show had a paltry five-inch screen, but the new version (which keeps the $230 price) moves all the way up to a 10-inch display. It’s the kind of screen that makes sense in a room like the kitchen where you can follow along with things like recipes. However, it won’t let you natively watch YouTube videos because Google and Amazon are still arguing about the terms of such things.

The only Fire product to debut today is basically Amazon’s DVR complete with an OTA antenna for watching and recording network shows. It’s a $230 box with a pair of tuners and 500GB storage.

There were a few other software-based announcements, but perhaps the most interesting is the new Alexa Hunches feature. It’s an evolution of the company’s AI, which allows it to try and follow logical threads to anticipate your needs. So, if you tell Alexa you’re going to bed and it notices that your door is unlocked, it will tell you and offer to lock if for you, assuming that you have a smart lock.

This kind of learning takes tons of data for the system to practice, and with an ever-increasing number of Alexa-powered devices watching and listening to whatever we do, it could have enough data to develop rather quickly.

We’ll get an idea of how Google will respond with news about its Google Assistant tech early next month.