This $229 smart hub is powered by Alexa and has a 7-inch display. 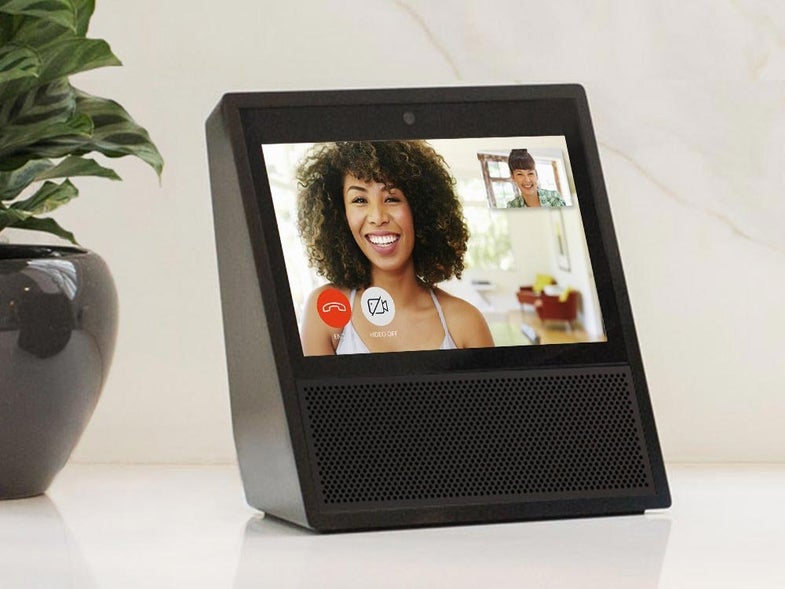 Just two weeks ago Amazon introduced the $200 Echo Look, a smart-home hub that includes a built-in camera to help evaluate your outfit before leaving the house. Now, the company has taken another step, introducing its flagship hub, the $229 Echo Show, which has both a 5-megapixel camera and a 7-inch touchscreen display.

The device itself is built like a fancy digital alarm clock, with the 7-inch screen sitting above a grill that obscures a pair of speaker drivers. It’s driven by Amazon’s Alexa virtual assistant, so you can interact with it using your voice just as you would a typical Echo, Echo Dot, or the Alexa app. It can display information like weather forecasts, YouTube videos, and of course screens meant to help you buy stuff from Amazon.

In many ways, the built-in screen seems to take the place of smartphone integration in the Alexa infrastructure. It can natively display live video footage from compatible doorbell and security cameras like Ring and Arlo.

The Echo Show can make video calls to other users who have an Echo Show or even just the Alexa smartphone app. Amazon also takes it one step beyond with Drop In, which, when set up, allows you to instantly connect to another person’s device in case you want to check in on an elderly relative or call other people in your house down for dinner.

Despite the addition of the touchscreen, Amazon still clearly intends for users to interact with Alexa by voice for the most part. The Echo Show has an array of eight microphones on top so it can hear commands from any direction. Noise cancellation helps it recognize voices even when music is playing.

Amazon on Tuesday also announced that it is bringing voice calling and messaging to the Echo ecosystem, meaning two people who both own an Echo device (whether it’s an Echo Dot or the Show, for example) could use them to speak with each other or simply leave a message, like an old-school answering machine. The same features work through the company’s free Alexa app.

While this is Amazon’s most expensive smart hub, it also seems like the most accessible for users who may not be as tech savvy. The device can be set up without having to download an extra app, and having information displayed on a screen may be simpler than arguing with a virtual assistant to try and achieve some specific tasks.

This product announcement comes at a time where Amazon is already showing its strength in the smart hub market. Research firm eMarketer has just published a study claiming a 70.6 percent U.S. market share for Alexa-powered smart hubs, compared to just 23.8 percent for Google Home. Microsoft’s Cortana is just now finally making it into a speaker device made by Harman Kardon, so it has some serious catching up to do in both hardware and market share.

Early criticisms have taken aim at the Echo Show’s design, likening it to an old CRT TV, but that may a byproduct of trying to attract users who are unfamiliar with the smart hub device genre. Amazon even specifically mentions some of these use cases, like checking on elderly relatives or remotely sharing photos with family members who live far away.

Ultimately, the addition of a screen seems like a natural evolution for the smart hub, especially from the Amazon camp who likely wants to fold more users into the Alexa infrastructure.

The Echo Show is currently available for pre-order for $229, which is just $30 more than the Echo Look, which lacks a touchscreen. Units will start shipping to customers around June 28th.