This is anything but hot A potential cryovolcano on Pluto, Wright Mons is named after the Wright Brothers. NASA/JHUAPL/SwRI
SHARE

The pictures just keep coming from NASA’s New Horizons spacecraft. The latest is a stunning closeup of the informally named Wright Mons, a potential cryovolcano on Pluto’s surface.

Last November, NASA researchers announced that they’d spotted two potential cryovolcanos on Pluto: Wright Mons, and Piccard Mons. The image above is a closeup of Wright Mons, named after the Wright brothers.

Cryovolcanoes, or ice volcanoes, don’t erupt lava like volcanoes here on Earth. Instead, they erupt an icy slush of mixed materials, including ammonia, water, nitrogen, etc.

The picture shows a relatively new surface without many impact craters, indicating that the crust in this area might have formed relatively recently. Researchers still don’t know what the red streaks are, or whether Wright Mons is definitively a cryovolcano.

If it is, its huge size, at 90 miles wide and 2.5 miles tall would make it the largest cryovolcano in the outer solar system. 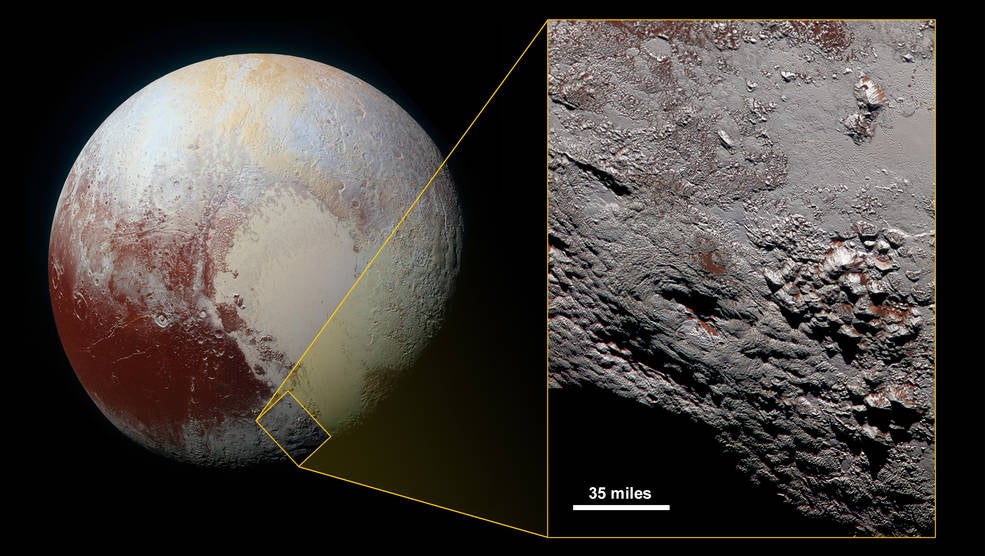