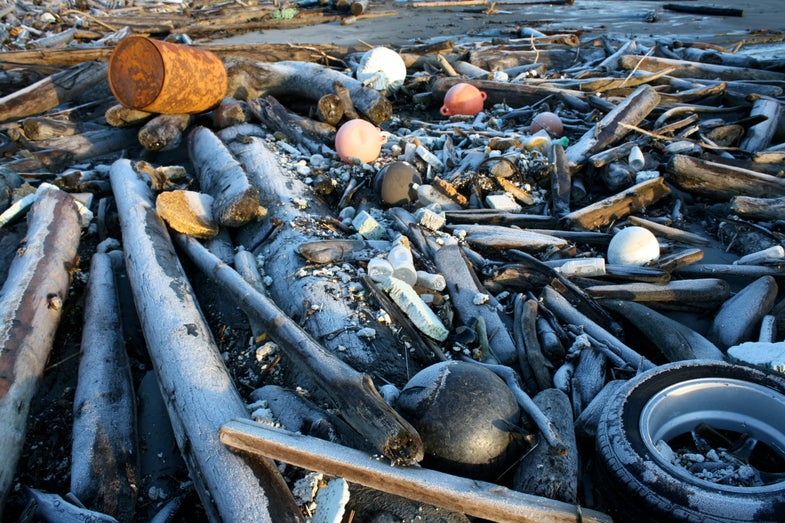 When a massive tsunami hit Japan in 2011, the wall of water killed nearly 16,000 people and in one horrendous instant, washed out to sea schools, businesses, even whole neighborhoods. Some of the flotsam and jetsam of people’s lives were buoyant, from soccer balls to giant docks, and washed up on the West Coast of the United States starting in 2012, a year after the tsunami hit.

Now, Alaska is trying to get rid of all the tsunami debris that litters their shoreline. The state has been collecting all the trash for years, but hasn’t had a place to put it. Starting this week, workers will begin loading a a barge the size of a football field with trash bags filled with the remnants of the tsunami.

Getting those trash bags filled has been an ordeal, as the Associated Press reports:

According to the Alaska Department of Environmental Conservation 70 percent of the material from Japan sank after it was swept out to sea, but over a ton kept floating east, eventually reaching North America.

Once the barge is full, the trash will be sent south, taking the material to Seattle for recycling. What can’t be recycled will then head to Oregon for disposal in a landfill. The $1.3 million project is funded in part by Japan, which is still struggling with cleanup in that country.

Next month, a robot will attempt to assist the cleanup efforts at the Fukushima nuclear plant, which was destroyed in the tsunami.